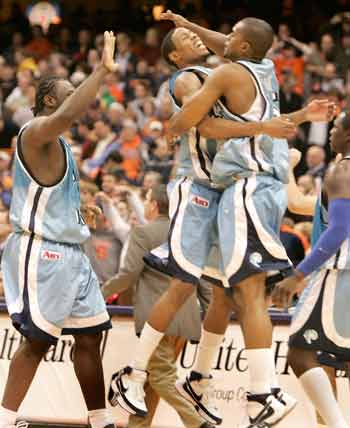 
The 6-3 junior logged 30 minutes, connecting on 6-of-10 shot attempts from the floor, including 6-of-9 from the perimeter.


But looking at the game on paper doesn’t tell the full story.


At the 9:31 mark of the first half, Baron tallied 21,197 groans from the Orange faithful after drilling a 27-footer, just a step or two over the giant block “S” at half court.


The various types of electronic messages received by the players and coaches following the win are commonplace in the age of technology. And in light of URI’s biggest regular season win of the internet age, all involved with Rhody basketball are buzzing like a cell phone on vibrate.


“It’s probably the most exciting win of my career because of its magnitude,” Coach Baron said. “We’ve played well all season, played a very tough schedule, but this win is special.”


“During the pre-game intros, their PA announcer talked about Syracuse being the fifth-winningest program in history and down the sideline,” he added. “Jimmy Boeheim is a Hall of Famer. The Final Fours, the national titles, the list of names of retired jerseys, the Carrier Dome – it’s unreal.” 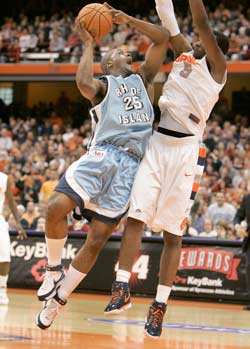 Despite all the history, the Rams did not enter the game with any sort of intimidation. They came in with a 9-1 record – the team’s best start to a season since the 1991-92 campaign – as well as a four-game win streak. Included in the win total were two over Big East opponents – a 74-67 neutral-site win over USF on Nov. 16 and a 77-60 blowout victory over Providence at home on Dec. 4.


Entering the game, Syracuse was 5-1 on the season and had compiled an all-time record of 394-79 at the Carrier Dome. Rhode Island had faced the ‘Cuse seven previous times, dropping six of those matchups. The lone win came during the round of 32 of the 1988 NCAA Tournament, as Carlton “Silk” Owens and Tom Garrick combined for 33 points, besting Sherman Douglas and Derrick Coleman en route to a 97-94 win. In the last meeting, on Nov. 30, 2003, the Rams overcame a poor shooting night – 1-for-22 from three-point land – to drop a 69-65 decision.


“We knew Syracuse was a good team,” Jimmy Baron explained. “But we’re good, too.”


Senior point guard Parfait Bitee echoed those sentiments: “We talked about it at halftime. If we played defense, we’d be in it at the end.”

The ending was made possible by the hot shooting from Rhody to start the game. The Rams connected on their first nine attempts from the perimeter – five from Baron, two from Bitee, and one each from Will Daniels and Joe Mbang. URI was 9-of-12 from three-point land in the first half, en route to a season-high 12 treys. 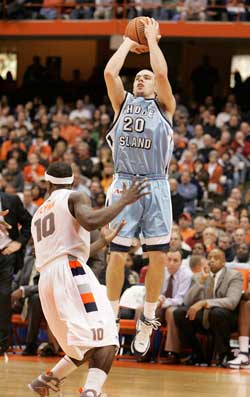 “Jimmy came out firing,” Coach Baron explained. “I’ve never seen him do that on the road. It really uplifted our team from the start.”


Boeheim, whose 2-3 zone has helped him to 756 career wins, three Final Four appearances, and a national title in 2003, had to switch away from his bread-and-butter defense.


“Rhode Island – you can’t play zone against them,” he said. “They just have too many guys who can shoot the ball. It isn’t one; it’s two or three different guys.”


To be exact, four Rams dialed it in from long-distance. And five reached double-digits in the scoring column, including Joe Mbang with 12 points and Lamonte Ulmer’s double-double with 11 points and game-high 11 rebounds.


“Parfait Bitee played, arguably, his finest game in a Rhode Island uniform,” Coach Baron said. “Our bench came in and gave us a lift, with Will in foul trouble. Joe and Jason Francis were able to use their size and strength inside, Lamonte and Keith Cothran played great defense. It was a total team effort.”


“We knew how good their backcourt was, with (Jonny) Flynn and (Eric) Devendorf,” Bitee explained. “We had to keep them in front of us and keep them from shooting.” Both of Bitee’s blocks were on shot attempts by Devendorf.

The win at Syracuse and the 10-1 start earned plenty of national recognition for Rhode Island on Monday, Dec. 10. URI received 41 votes in the Associated Press Top 25 poll, while also garnering 23 votes in the ESPN/USA Today Coaches Top 25 poll.


Rhode Island’s 10 wins ranks No. 1 among all 341 NCAA Division I schools, while the Rams also lead the nation in points scored (895).


“The win at Syracuse shows that we can overcome adversity and that the sky is the limit for our team,” Will Daniels said. “We are coming together more and more, becoming a family, and learning our true capabilities. We won these 10 games as a team and we’ll continue to have success as long as we don’t deviate from that.”


“And a big part of that comes from our fans. The students were incredible versus Providence – it was the best atmosphere I’ve ever been a part of,” the senior forward added. “And all season long, no matter where we’ve played, there has been a great crowd of Rhody fans every step of the way. Brown, Boston College, the three games in Florida, even Syracuse. It was nice to see Rhody blue among all that Orange at the Carrier Dome. The campus has really got a buzz about our basketball team.”


If Rhode Island keeps up its winning ways, there should be plenty of Keaney Blue buzz all around campus, in the stands of the Ryan Center, and on the cellphones of a team bound for a special season.