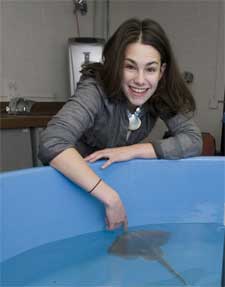 If she can’t be a mermaid, URI student will settle for marine mammal research


KINGSTON, R.I. – December 28, 2007 – Whenever the topic of career plans comes up, University of Rhode Island sophomore Ashley Stoehr is always ready with an answer.

“I like fish, I like the water, I scuba dive, so I’d like to be a mermaid, if I could,” she says with only a hint of a smile.


While few jobs are available in the mermaid field, the Cranston resident is already distinguishing herself as she prepares for a career in marine biology. Stoehr was recently honored as one of 10 University College Scholars at URI for her high academic achievement during her freshman year.


Her interest in marine biology was piqued by her biology teacher at Cranston High School West, and that led her to earn certification as an advanced scuba diver.


“I dive as much as possible, mostly going to Fort Weatherill in Jamestown,” said Stoehr, who is an active member of the URI Marine Society and the URI Scuba Club. “My favorite place is probably Hazard Rocks in Narragansett. It’s hard to get in because of the waves, but the visibility is great and we always see huge starfish and huge horseshoe crabs.”

Stoehr got her first experience with marine biology research last summer as part of a team led by URI Professor Cheryl Wilga studying the mechanics of chewing and biting in little skates, a flattened fish related to sharks.


“We sutured these sonometric crystals into their mouths and then put in a transducer to measure the pressure,” she explained. “When we feed them and they bite down, it gives us data on how they process their food. Even though they’re flat, they seem to be more similar to sharks than to other bony fish.”


Stoehr hopes to continue this research next summer while also looking forward to a Sea Semester during her senior year, when she will spend six weeks at Woods Hole Oceanographic Institution learning nautical science, marine affairs and developing a research project, and then spending six weeks aboard a boat conducting research and operating the vessel.


But marine biology isn’t all that gets her excited. Stoehr is also majoring in political science.

“I like the controversy in history, so I took classes in American politics and international politics, and I really liked it,” said Stoehr, who joined the URI Debate Club because she claims she loves to argue. “In the future I want to study the reproductive biology of marine mammals, and tie in the political science about how global warming or pollution might affect the animals. The two subjects fit together well.”


But first she will complete her undergraduate studies at URI and then pursue a graduate degree. Or two or three.


And then if there’s still time, she’ll keep trying to become a mermaid.