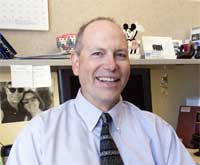 KINGSTON, R.I. – December 4, 2007 – A professor in the College of Business Administration well known for his love of teaching and high energy level with students has been named the first Richard Vangermeersch Endowed Professor.


Allan W. Graham, associate professor of accounting, is the first to hold the post named in honor of Richard Vangermeersch, who served the University for 34 years, retiring in 2004 as a professor of accounting. To honor Vangermeersch, friends and colleagues supported a fund for an endowed professorship in his name, which stands at $326,000. Interest income from the endowment is used to support the professorship.


URI is in the midst of its “Making a Difference” capital campaign, which seeks $100 million to recruit and retain outstanding faculty, enhance the student-centered campus experience, provide undergraduate scholarships and graduate fellowships, and fund cutting-edge academic and research initiatives.


Graham, while not as flamboyant as Vangermeersch, who often performed song-and-dance routines in his classes, shares the same enthusiasm for teaching and the University. Graham has been with URI since 2000.


“Allan is genuinely interested in the College and its students and in making the University better,” said Mark Higgins, dean of the College of Business Administration.


Professorships or endowed academic chairs are often used to attract talent to a University from other institutions. But Higgins said the College had a candidate in its own midst who was worthy of the chair.


“We decided to fill the professorship internally because we had a quality individual in Allan,” Higgins said. “It’s important to reward people who have done a good job. Professorships help us retain excellent faculty like Allan.”


“Being selected to the Vangermeersch professorship is absolutely the proudest moment of my life,” said Graham, who came to the University after earning his doctorate in accounting from Virginia Polytechnic Institute & State University in 2000. “It sets you apart from your peers at other institutions.


“Richard (Vangermeersch) is a great role model, as are a number of other senior faculty in this department,” Graham added. “If you talk to anyone who has been here in the past 20 to 30 years, they always ask about Richard, Spencer Martin, Joe Matoney and Henry Schwarzbach.


“What I find particularly impressive about Richard was his ability to maintain an active research agenda while doing a major amount of teaching.”


The teaching bug bit Graham when he was a graduate student at Virginia Tech where he taught two class sections a semester. He taught a total of eight different accounting courses.


“When you get to the Ph.D. level, they try to disabuse you of teaching and try to get you focused on research, so the hierarchy of priorities is: research, the courses that you take for your doctorate and then teaching.”


He said he focused on the area out of a sense of service, and now he is pleased with the entire corporate social responsibility movement.


Graham, who earned his bachelor’s degree in public policy and his master of business administration, both from the University of North Carolina, also served as assistant to the town manager of Tarboro, N.C. and later as town accountant in Carrboro, N.C. He also held positions of budget manager at Virginia Tech and business manager at Virginia Tech Intellectual Properties. At URI, he brings all of that experience to his undergraduate classes on accounting information systems, accounting management and ethics.


“One of the reasons why I focus on information systems is that was where many of the accounting issues arose in the big companies,” Graham said. “Ethic in accounting is still such a big topic. The mingling of business consulting and accounting by major firms was at the heart of the problem. We have to remember how we got there.”


To make a donation to the Vangermeersch Endowed Professorship or for further information, contact Michaela Mooney at University Advancement at