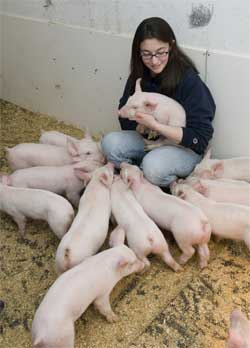 KINGSTON, R.I. – December 14, 2007 – Jennifer Halleran grew up miles from any working farms and even farther from an interest in farm animals.


But just three semesters into her college education at the University of Rhode Island, she is responsible for teaching her fellow students about chickens and has personally delivered two litters of piglets. She even won an award at a livestock judging competition.


“I’ve always loved animals, and I always had dogs and rabbits and hamsters and guinea pigs growing up,” said the Towaco, N.J. resident studying animal science and microbiology. “But when I visited URI the first time, I remember going across the street to Peckham Farm, and as soon as I walked in they handed me a chicken. Now I’ve become the chicken lady.”


Halleran hopes to become a veterinarian, but she knows the challenges of being accepted to vet school, so she is doing everything she can to distinguish herself.

She is off to a good start. Halleran was recently honored as one of ten University College Scholars at URI for academic achievement during her freshman year. Yet her academic success started even before she arrived on campus.


As a senior at Montville Township High School, she helped to sequence the genome of the brine shrimp (Artemia franciscana) as part of her molecular biology class with teacher John Brick, which led to five publications in the National Center for Biotechnology Information, an online resource center of the National Institutes of Health.


“No one had ever sequenced the brine shrimp genome before, so there was a lot of opportunity for many students in my class to find sequences that no one had found before,” explained Halleran. “Luckily, I discovered three DNA sequences, two of which coded for proteins.”


As a member of the URI chapter of Northeast Student Affiliates, an animal science club, she participated in a livestock judging competition held at Penn State University, where she helped the club to a second place finish against 11 other New England universities. She volunteered to present a research paper as part of the competition – her topic was “Livestock Transgenesis for the Production of Biopharmaceuticals” – and she placed eighth out of 45 students.


But it is her work at URI’s Peckham Farm that she enjoys the most. She feeds the pigs, sheep, chickens and donkeys, cleans the farm and even helped two pregnant sows deliver piglets.


“The first time I had no idea what I was going to do when the piglets popped out, so I was freaking out a bit,” recalled Halleran, who worked through high school at the Montville Animal Hospital and at Animal Emergency and Referrral Associates and volunteered at the Bloomingdale Animal shelter. “When she started to deliver, my friends and I cut the umbilical cord, cauterized it, made sure the piglets nursed and protected the babies from being squished by the mother. She had some complications, so the whole process took five hours. But the second litter was a lot easier.”


Halleran looks forward to beginning a new research project evaluating the levels of an enzyme in sheep next semester while also hoping to eventually revisit her brine shrimp research.


“One of the protein sequences I found in bring shrimp induces the formation of cartilage,” she said, “so I want to take that protein sequence and develop an oral or injectable drug to build cartilage for arthritis patients and others who have lost cartilage in their joints. Hopefully it could be used for both animals and humans.”


Although she remains nervous about whether she will be accepted into vet school, URI President Robert L. Carothers is not. At the awards ceremony for the University College Scholars, he joked that, based on her current record, he’s almost ready to hire her as a professor and offer her tenure.