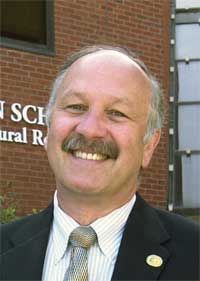 
He succeeds M. Beverly Swan, who served in the position for 17 years and asked to return to the faculty. She has been appointed the Justin Smith Morrill University Professor.


As provost, DeHayes will serve as the chief academic officer of the University with overall supervisory responsibility for its teaching and scholarly missions. He will advise the president on policies and operations, chair the Council of Deans, and serve on the President’s Team, the Faculty Senate and the Joint Strategic Planning Committee. He will also oversee special centers and partnerships and set goals for all of the University’s educational programs.


“The provost is responsible for the vitality of the University’s academic life and the intellectual well-being of our students, staff and faculty. I know that Dr. DeHayes will serve that role well and provide outstanding leadership to our innovative community of scholars,” said URI President Robert L. Carothers. “I look forward to receiving his guidance and insight as we work together to grow the university.”


In addition to his role as provost and vice president for academic affairs, DeHayes will also hold an appointment as a tenured professor of natural resources science in the URI College of the Environment and Life Sciences.


“I’m pleased to become part of the URI academic community. It very quickly became clear to me that URI is an institution seeking to distinguish itself by giving its absolute best to do work that really matters in the world, and takes seriously its responsibility to educate a new generation of society leaders equipped with the competence and confidence to address the challenges of the world,” DeHayes said.


DeHayes comes to URI after a 30 year career at the University of Vermont, where he started as an assistant professor straight from graduate school and taught courses in forest biology, natural resource ecology, and conservation biology while conducting research on the genetics and physiology of forest ecosystems. He was promoted to full professor in 1989 and subsequently served as graduate program coordinator, associate dean and interim dean before being appointed dean in 2000.


As dean of the Rubenstein School, DeHayes led an effort to transform the School by recasting its mission, establishing a completely new curriculum, hiring new faculty and building a respected interdisciplinary research enterprise that has yielded an average of $350,000 in research grants per faculty member per year. He also achieved tremendous success in fundraising for the School, raising approximately $32 million through the development of creative partnerships with private sector individuals and foundations.


DeHayes has been a champion of cultural and ethnic diversity at the University of Vermont by establishing a Multicultural Scholars Program, incorporating multicultural perspectives in the curriculum, and developing and teaching a course on “Race and Culture in Natural Resources.” In addition, he recently completed a three-year term as president of the National Association of University Forest Resources Programs, which provided him with experience working closely with federal legislative officials and agency leaders.


In becoming URI’s next provost, DeHayes emphasized that “serving in a leadership role in an institution begins by believing in what it stands for.”


“For me, URI stands out for its strong and combined commitment to excellence in education and research, accessibility to Rhode Islanders, and enhancement of the vitality of the state for all of its citizens. These values resonate strongly with my own,” he said. “URI is strategically and geographically positioned to be among the elite public institutions in the region. I am looking forward to deploying the strength and innovative capacity of the faculty, staff and students to rise above our inevitable challenges — to define a distinctive and strategic identity for the institution, ignite the passion of the faculty, and commit ourselves to partnerships on- and off-campus that allow us to address in meaningful ways the most compelling and important issues of the state, nation and the globe.


“I look forward to joining President Carothers, his leadership team, and the faculty, staff, and students to build a greater URI that is the pride of the state of Rhode Island,” he added.


A native of Brooklyn, N.Y., DeHayes earned his undergraduate degree in Earth and space science from the State University of New York at Stony Brook and his master’s and doctorate in forest genetics from Michigan State University. He has been awarded $13.5 million in grant funds and published 100 articles and book chapters. He was cited by the University of Vermont for teaching excellence in 1991 and was named University Scholar in 2001 in recognition of sustained excellence in research and scholarship.