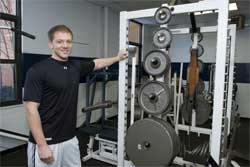 
While his best playing days are probably behind him, he is on his way to spending his career with a different kind of elite athlete. Douglas was recently selected to intern as a strength and conditioning coach at the U.S. Olympic Training Center in Chula Vista, Calif., where the nation’s best track and field athletes, as well as those competing in cycling, tennis, rowing, soccer, softball, kayaking, field hockey and archery, will prepare for the 2008 Olympics.


“My goal has always been to be a strength and conditioning coach,” said Douglas, a native of Battle Creek, Mich. who will graduate in May with a bachelor’s degree in exercise science. “It fascinates me the level of performance that athletes compete at today. I really want to help make them the best that they can be and further develop them as athletes.”


The U.S. Olympic Committee maintains three training centers for its athletes, and each accepts only one strength and conditioning intern per semester. Douglas was selected from among hundreds of applicants after submitting a comprehensive application and undergoing a rigorous telephone interview. He is just the second URI student to ever have been chosen for the prestigious internship.


“A big part of why I was accepted was because I had experience as an intern with the varsity athletes here at URI,” Douglas said. “And the letters of reference from the kinesiology staff here were also a big help.”


“Just look at the different track and field athletes – the throwers need whole body power, the long distance runners train for endurance rather than power, and the sprinters are power based but they also need a level of endurance,” he explained. “It will be my job as the strength coach to come up with my own philosophy and conditioning approach and put them into practice.”


While his internship officially ends in May, it’s possible he may continue through the summer during the final preparations for the Olympics in China.


“When the regular trainers go to Beijing, I hope to stay at the training center to work at some of the summer camps there,” Douglas said, then adding with a smile, “but if they ask me to go to Beijing, I would love the opportunity.”


However the internship ends, Douglas has a firm plan for his future.


“I want to be a head strength coach for a college or university or for a professional team or maybe at the Olympic Training Center,” he said. “That’s the goal I’m shooting for, and this internship is a good stepping stone. My next step is to go to graduate school in the fall to get a master’s degree in kinesiology.”


“I’ve had a great college career, and I’ve learned so much from my kinesiology professors. I have a lot to look forward to with this internship opportunity,” Douglas added. “And I’m excited about my future.”