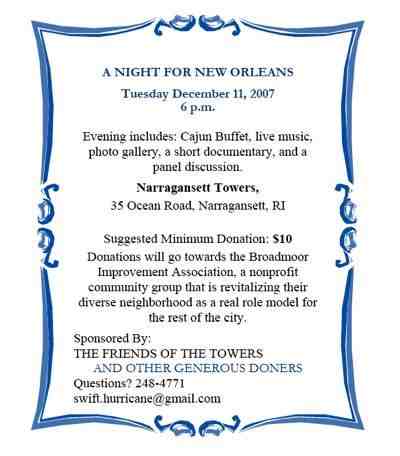 KINGSTON, R.I. –December 5, 2007—It has been more than two years since Hurricane Katrina unleashed its horrific destruction on the Gulf Coast, but the 10 University of Rhode Island students enrolled in the honors senior seminar “Voices of Katrina” want you to know that although the hurricane and its aftermath have dropped out of the headlines, they won’t forget what they have learned in their honors course.


Throughout the semester, the students studied the effects of hurricane Katrina on New Orleans and surrounding parishes, both from the perspective of infrastructure and human impact. They also became aware that many of the systems remain in disarray, health services, repopulation of evacuees, community support for displaced persons, housing, schools, and a myriad of other services fundamental to human wellness.


The students have converted their lessons into action. They are inviting the public to an entertaining evening, “A Night for New Orleans” dedicated to building awareness and raising money for the Hurricane victims. The event will be held Tuesday, Dec. 11 at 6 p.m. at the Narragansett Towers, 35 Ocean Road, Narragansett. There will be a minimum $10 donation, payable at the door. Students are encouraged to donate whatever they can. For more information, email swift.hurricane@gmail.com.


Historically significant music will be played throughout the evening, including jazz as America’s indigenous art form. Cajun’s cuisine will also add spice to an evening that will highlight the city’s unique qualities. A student-made documentary will cast light on the hurricane preparedness of Rhode Island.


All proceeds will go to the Broadmoor Improvement Association, www.broadmoorimprovement.com, a community cleanup organization in central New Orleans.


A gallery of Katrina photographs by Jess Raimondi will also be on display.


The evening will culminate with a documentary made by three students in the class, Chris Barrett, Astrid Drew, and Jeff Albanese. The documentary explores New England’s perspective of the storm as well as an examination of the potential for a similar storm in Rhode Island.


The Towers in Narragansett serve as a significant location due to its location, history, and local symbolism as an icon of America’s love of the coast. The interior will be transformed, to evoke the feel of New Orleans as a way to create cultural mindfulness among the attendees.