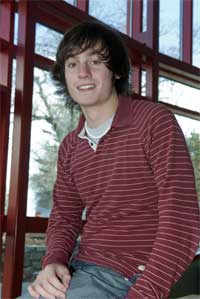 KINGSTON, R.I. – December 6, 2007 – Westerly resident and University of Rhode Island sophomore Brian Bonk can make one claim that few other college students can make: he never graduated from high school.


“I missed a lot of my junior and senior years in high school for medical reasons, but URI still allowed me to enroll on a trial basis,” Bonk explained. “The Admissions staff was very generous and forgiving, and so far so good.”


Bonk quickly showed that the URI Admissions Office made an excellent decision. He was recognized last month as one of 10 University College Scholars for his high academic achievement during his freshman year. Given his choice of majors – chemical engineering and Chinese – he didn’t take the easy route.


“All through high school, I was torn between a number of disciplines,” he said. “I could see myself studying English, history, economics, science, math. I enjoy chemistry more than the other sciences, partly because chemical engineers are on the forefront of innovation, and I feel like chemical engineering will give me the skills to have an impact on the world. It’s a very versatile degree.”


Why major in Chinese, too?


“It was a new program being offered, and I thought, ‘why not?’” Bonk said with a smile. “But it’s a lot of work. My first Chinese class took more time than all my other classes combined. It’s like learning two languages at once, because you have to learn the whole alphabet and the pronunciation. But it seems like it might be useful in the future.”


Bonk’s academic success has also led to a wide range of extracurricular activities as well. He works as a chemistry tutor and a chemical engineering research assistant while also serving on the professional development committee of the URI chapter of Theta Tau, a professional engineering fraternity.


“Theta Tau is a fledgling organization on campus, and that’s one of the reasons I joined – I wanted to make a difference and shape the future of the group,” he explained. “Aside from typical community service activities, we do a lot of service projects for the College of Engineering, plan company tours, host guest speakers, and we study together. We’re even planning an etiquette dinner.”


In addition, Bonk is a member of the local chapter of the American Institute of Chemical Engineers.

“We’re entering a national competition to design a car that’s powered solely by a chemical reaction,” said the URI student. “The car has to travel an exact distance, but they don’t tell you what that distance is until an hour before the competition. It also has to carry a specific weight, but they don’t tell you how much until an hour before. This is the first year that URI has entered, so it has proven to be quite a formidable project.”


Bonk will make his first visit to China next summer to try out his new language skills. Following his junior year at URI, he will return to China for a full year as part of the University’s International Engineering Program to study at a partner university and intern at a local engineering firm.


He is uncertain about his future beyond that, however.


“I’m not ready to commit to any one thing just yet,” he said. “I’m still in a phase of exploration.”