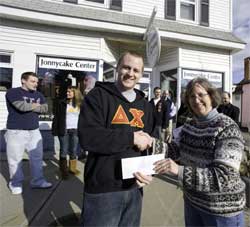 
KINGSTON, R.I.–November 28, 2008–The University of Rhode Island Greek Community presented a $12,000 donation to the Jonnycake Center in Peace Dale this week in honor of URI President Robert L. Carothers who has announced his plans to retire next June.


The Jonnycake Center strives to improve the quality of life for individuals and families by providing comprehensive assistance to those in need of food, clothing, and household items. It also provides individual and systemic advocacy for their clients.


The money was raised during the Greek Community’s annual Philanthropy Week, a series of philanthropy and community service events. All 13 fraternities and nine sororities participated in the events.


“The Greek Community made the donation in President Carothers’ name to honor him for his dedication and service to URI, as well as, to the Greek community,” said Bowers. “The President has helped create a tight-knit community at URI while facilitating responsible change.”


“This wonderful gift to the people of Rhode Island symbolizes the transformation of the fraternities and sororities at URI. It was a real honor to have it given in my name,” commented Carothers.