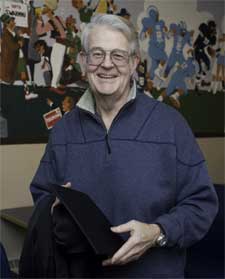 
KINGSTON, R.I. – December 22, 2008 — It wasn’t until J.R. Fowler cared for a family member—his mother-in-law, a psychiatric nurse—that he was inspired to return to his youthful dream of a career in health care.


While Fowler was in high school he had dreams of getting into the medical field but he followed a different path. He graduated from the University of Kansas with a degree in journalism. Degree in hand, he went into the Air Force where he spent the next 20 years; during that time he acquired a master’s degree in public administration. He served his last assignment in Los Angeles as liaison for the motion picture and TV industry working on Top Gun, Running Man and The Right Stuff. As soon as he retired, he and his wife moved to the Monterey Peninsula in California where he began work for the Carmel Bach Festival.


While working for the festival, Fowler and his wife, author/illustrator Leslie Tryon, became the primary caretakers for Tryon’s mother who lived with them for the last eight years of her life.


“You’re really good at nursing,” she’d say, “You might consider it as a new career.”


Fowler said he learned a great deal from the experience of caring for his mother-in-law; “It was her kind, inspiring words that made that high school lightbulb begin to glow again.” He revisited that old dream of a career in health care.


The move from California to Rhode Island was a natural one since Tryon’s entire family can be found in New England. Fowler settled into Westerly, thanks to cousins who had lived in that community for years. Soon after he moved to Westerly he was accepted to the URI College of Nursing.


When asked why he chose to pursue a degree at his age, he said, “A friend of mine who also got into nursing later in his life had always said it is a challenging and most rewarding job. And, as for my age, the field of nursing doesn’t present insurmountable age and gender bias.”


At URI, Fowler said he has received a great deal of acceptance, support and encouragement from everyone at the University.


“I was treated as an equal among the URI students which is what makes it neat,” said Fowler.


But it was sometimes a different story when doing clinicals in a hospital; patients treated him differently than the other nursing students. “They sometimes thought I was the doctor, but I always corrected their misperceptions,” Fowler said. “They would ask me why I wanted to be a nurse, and it served as a nice icebreaker.”


Faculty and students alike are fond of J.R. “ I think he realizes that he gets our support,” said Tara Johnson, fellow December graduate. “ He always says about my girlfriends and me, ‘Without you, I wouldn’t have made it.’ He has a sense of camaraderie with us.“


Mary Lavin, associate clinical professor of nursing, said Fowler was supportive of his student colleagues. “His wisdom and ability to listen were so valuable. Older students add a breadth of knowledge from their experiences, and young students offer energy and enthusiasm. Our younger students look up to someone like J.R. because he gives them confidence to succeed. He is always interested in people,” Lavin said.


At the College’s pinning ceremony in December he had a position of honor. When it came time to vote for the student speaker earlier in the semester, the choice was obvious. “We didn’t even need a formal ballot,” Johnson said. “It was a unanimous nomination and J.R. was floored.”


“My overall reaction was one of surprise, wonder and pleasure at being selected,” Fowler said. “I recognized that this was a singular honor and not to be taken lightly. A little while later, I also understood that this was going to be as challenging as any of my other finals for this semester.”


Fowler concluded by saying that his URI experience was challenging and rewarding and has given the greatest confidence that “I am entering the field of nursing with the best foundation I could hope for. I owe that to this University.”

NEW GRADUATE: J.R. Fowler of Westerly, poses in the Memorial Union after picking up his cap and gown for his pinning ceremonies as a new graduate of URI’s College of Nursing. URI Department of Communications & Marketing photo by Michael Salerno Photography