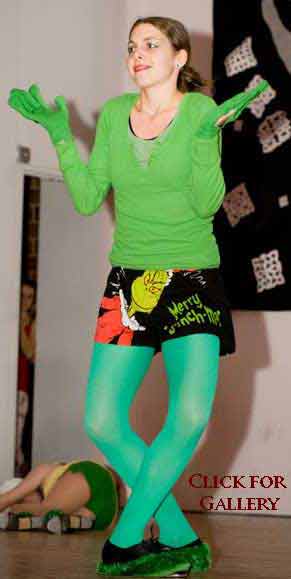 
“Santa Claus is Coming to Town” featured the 200-member Dance Company performing against a backdrop of giant snowflakes on a stage bathed in green and red spotlights. The troupe’s performances captured the fun, zaniness, longing and love of the Christmas and holiday seasons.


Three hundred audience members found themselves smiling, humming and tapping their toes throughout the show, which raised about $1,000 for the group’s spring show.


“This is the first year we have done a holiday show,” said club President Alyssa Fulchini, a senior majoring in journalism from Methuen, Mass., who was raised and did most of her dancing in Everett, Mass. “We wanted to do a winter performance to raise funds for our big spring show.”


The group, which is entirely student-run and funded, started its classes in September, meeting each Monday from 5 to 10 p.m. in Edwards and the dance studio in the Tootell Physical Education Center. On Thursday nights the dancers rehearsed from 5 to 8 in the Multicultural Center.


They put the entire show together in five weeks. The teachers are all URI students and they worked with their groups in ballet, pointe, lyrical, hip-hop and tap.


Fulchini, who has been dancing for 17 years, was one of the teachers, as well as the lead administrator of the club. She was the show’s emcee.


“Everyone loved the idea of a winter show because many club members were disappointed that we performed only once a year,” Fulchini said. “It was really a team effort, and I am so proud of everyone. It was especially stressful for the teachers and officers because we are all perfectionists. The end result was evidence of our hard work.”

She said the officers and teachers spent countless hours decorating the leotards and tops for the show.


In addition to its own members, the club invited performers from the URI Irish Step Dance Club and the URI Ballroom Dance Club. The student band, Incident Report, provided live music and Lindsey Page, one of the company’s members, performed a vocal solo.


Fulchini said she learned how to run a studio from her private teachers and studio managers. “To get respect, you have to give respect,” she said. “We talk about it all the time as a club and that is the reason for our success.


“It is important to step up when people need you and that’s how you develop support.”


She said such commitment is needed in a club that involves experienced and beginner dancers.


“The best part of the show was how fluid it was,” Fulchini said “The girls in each number were fantastic. Our music, lighting and backdrop were so great.”


When the dancers took the stage for the curtain call, the joy and emotion overwhelmed the officers and teachers. “Oh, I was crying, the girls around me were all crying because we had done it. The crowd’s applause went on for a while,” Fulchini said.

Club Vice President Brittany Campbell, a junior from Enfield, Conn. majoring in communication disorders/speech therapy, said everyone was gung ho to do the show.


She was in five pieces, including performing as the lead dancer in “Mr. Grinch.”


“At first, I wasn’t excited about being the Grinch because I had to express being mean and creepy in a strong way,” Campbell said. “This was totally not my personality, but I learned to really be very pronounced with my emotions. I had to be very animated.”

Campbell said the dancers would have a few weeks to rest up during winter break. “Then, the first week of classes in the spring semester we start getting ready for the spring show. We begin auditioning for solos.”


Thanks to the success of “Santa Claus is Coming to Town,” the dancers will probably now be able to buy costumes with money that won’t come from their own pockets.


For more information about supporting the club, please call 617-413-9310 or uridancecompany@yahoo.com.


HAVE A GRINCHY CHRISTMAS: Brittany Campbell of Enfield, Conn. a member of the University of Rhode Island Dance Company performs in the group’s recent holiday show as “Mr. Grinch.”


(PHOTO 201) A MOVING SCENE: Members of the URI Dance Company perform “Carol of the Bells.” From left are Arielle Kippax of Greene, Maine, Elena Dempsey of Greenville, R.I., Lindsey Page of Sutton, Mass. and Michele Bernbaum of Melrose, Mass. Jamie Mercurio of York Harbor, Maine was the choreographer


URI Department of Communications and Marketing photos by Michael Salerno.