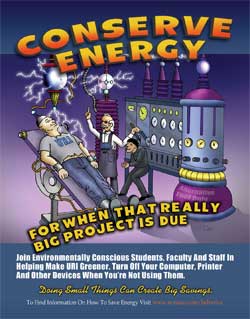 
KINGSTON, R.I. – December 2, 2008 – University of Rhode Island students living in campus residence halls take showers lasting an average of 13 minutes, and they typically leave their computers on for 16 hours a day, although more than one third never turn their computers off. Most students also never turn off the heat, air conditioning or fans when they leave their rooms.


These findings – which are comparable to findings at other universities — are among the results of a survey conducted last spring that has led to a unique behavior change campaign aimed at reducing energy use on campus.


“Changing wasteful behaviors is just one more energy conservation strategy we can employ on campus, like installing more efficient lighting or weatherizing our buildings,” said Jerry Sidio, URI director of Facilities Services. “While it may be easier to make physical changes to our facilities to save energy, if we want to achieve our energy savings objectives we must also change behaviors.”


The behavior change campaign is part of an $18 million energy efficiency and conservation initiative launched in 2007 that will save more than 7 million kilowatt-hours of electricity and 42 million pounds of steam per year. The cost of the three-year project with NORESCO, a leading energy services company, will be paid over 12 years from the savings on the University’s utility bills.


The first year of the initiative consisted of the installation and upgrade of lighting, energy management systems and other equipment in the URI athletic complex and Memorial Union. Similar installations are now under way at the Narragansett Bay Campus and the Feinstein College of Continuing Education in Providence. This past summer the project targeted the residence halls, health center, and Dining Services. But it is the behavior change campaign that is generating the most enthusiasm.


“As far as we know, NORESCO is the only energy services company that incorporates behavior change into its energy performance contracts, and only three other universities have tried it, so URI is at the cutting edge with this campaign,” explained Scott Finlinson, the coordinator of the project for NORESCO. “We aim to create change, verify it, and sustain it for the long term.”


The results of the student survey last spring found that many students engage in 30 behaviors that waste energy, but the campaign targets only the three most common and most wasteful behaviors: shower length, leaving computers on, and leaving heating/air conditioning on when not in the room.


In August, all 112 URI resident assistants were recruited to encourage the students living in their buildings to save energy. Posters were placed around each residence hall, notices were hung in showers, students were asked to sign a commitment pledge, and the RAs modeled appropriate behaviors and offered gentle reminders.


“It didn’t take much effort on our part to get the residents enthusiastic about saving energy. They’re really into it,” said John Rooney, a resident assistant in Barlow Hall and a URI junior studying entrepreneurial management. “A couple of students have started a recycling program in the building, everyone seems to like the new showerheads, and some of my residents even harass me when I stay too long in the shower.”


Other students have also been recruited to lead the charge for energy conservation – those that Finlinson calls “self-champions” because they are self-motivated to save energy – including URI Energy Fellows, the Renewable Energy Club, and Student Action for Sustainability.


“While we are focusing on only three behaviors, what typically happens is that we also see improvements in the wasteful energy behaviors that are not targeted,” Finlinson said. “The initial positive behavior changes that result from the campaign then motivates those students who didn’t participate at first, and then next year when a new batch of freshmen arrive, they’ll see that energy conservation is a part of the URI culture.”


Once the campaign has met with success in the residence halls, a related campaign will focus on students who commute to campus. A behavior change campaign targeting faculty and staff will follow next year.