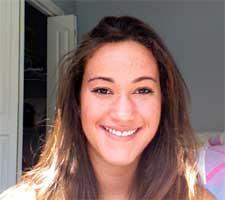 
KINGSTON, R.I. – December 29, 2008 — She had only 90 seconds – the average length of an elevator ride — to convince a panel of judges that her pocket-sized reusable shopping bag was an innovative product that could succeed in the marketplace, but University of Rhode Island junior Liz Downing had a lot going for her.


She already had a prototype of her product, called the Poksak, and a team of business associates supporting her effort. Equally important, she talks fast.


“The reusable shopping bags that most people have now are big and bulky, made out of a heavy fabric that make them more like a basket, and more often than not we leave them in the car and forget about them until we’re at the cash register and it’s too late to use them,” said Downing, a resident of Tolland, Conn., studying international business and French at URI. “The Poksak is made of a thin polyester that can fold easily and fits in your purse, pocket or glove compartment.”


After her pitch to the judges of the contest, Downing received enthusiastic support and feedback that has convinced her that her product can succeed.


“The judges liked that I had a lot of enthusiasm, and they said that they have the same problems with their existing reusable bags, so it was definitely a product they could understand the need for,” Downing said. “They clearly saw that what is currently on the market isn’t working, and the Poksak is a practical solution.”


The URI student competed against 33 other participants in the Elevator Pitch Contest, the first element of the Rhode Island Business Plan Competition, which has been organized to promote entrepreneurship and the development of start-up and early stage companies in Rhode Island by encouraging submission of plans of original business concepts that will lead to the development of new growth businesses in the state. The winners will share $150,000 in prizes.


While Downing said that the Poksak was not her idea – the credit for that goes to several unidentified associates based in Newport – her role in the product is marketing and the development of a business plan. She is now fine tuning her business plan, spreading the word about the product in the region, and seeking feedback from potential customers.


Downing will have to do some of that work from across the Atlantic, as she will spend the next five months studying in France at the Euromed School of Management in Marseille. She enrolled at URI because of its noted French program, one of the largest in the country, and her interest in business led to a desire to eventually work in Europe.


“I don’t really have a clear idea of what I want to do for a career,” Downing said. “But it looks like the Poksak is going to be a long term project. It already seems like it’s going to be successful, so many people are enthusiastic about it, and it’s something they can relate to. They sell for less than the price of a cup of coffee, which is another reason why I think it’s being met with such enthusiasm.”


The bags will soon be available for sale for $3 each at www.poksak.com.