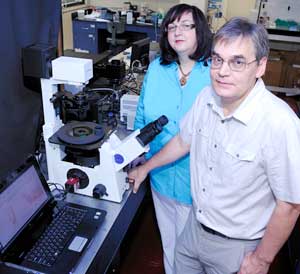 Read the worldwide coverage of this big news!

KINGSTON, R.I. -– October 27, 2009 — Two University of Rhode Island associate professors, biophysicists Yana Reshetnyak and Oleg Andreev, have discovered a technology that can detect cancerous tumors and deliver treatment to them without the harming the healthy cells surrounding them, thereby significantly reducing side effects. The URI couple has attracted more than $6 million in grants in four years. In addition, a number of health care and pharmaceutical companies have expressed interest in their work.

It is possible, says Andreev, that one day their detection method could be used as a universal procedure, similar to mammography or colonoscopies. Their harmless imaging test could locate a problem before the patient ever feels ill.

The key lies in the acidity level of cells. While normal cells maintain a pH of 7.4 with little variation, cancer cells, expend a great deal of energy as they rapidly proliferate, pumping protons outside and creating an extracellular pH level of 5.5 to 6.5. (The lower the number, the higher the acidity.)

While scientists have known about tumor acidity for years, they had not devised a way to target it. Donald Engelman in the molecular biophysics and biochemistry lab at Yale University discovered the peptide that targets acidity, but had not employed it until Reshetnyak joined his lab as a postdoctoral student in 2003. She and Andreev, then a senior scientist at an anticancer drug delivery company, suggested an investigation into the peptide’s potential as cancer targeting agents.

In 2004, Reshetnyak and Andreev joined the Physics Department at URI and established a biological and medical physics laboratory. The couple continued their collaboration with Engleman and their investigation of the properties of the peptide, now called the pHLIP® peptide. After making some modifications to it, they demonstrated that pHLIP® could find a tumor in a mouse and deliver imaging or therapeutic agents specifically to cancer cells. The Yale/URI targeting system has a patent pending in the U.S. and Europe.

The researchers suggest their discovery method could be used to monitor other disease development and treatment. It also could play an important role in the study of arthritis, inflammation, infection, infarction, and stroke since those conditions also produce high acidity.

In addition to targeting cancerous tumors, the couple has discovered a novel delivery agent, a molecular nanosyringe, which can deliver and inject diagnostic or therapeutic agents specifically to cancer cells.

“Since we know the mechanism of delivery and translocation, we believe that we are able to tune the nanosyringe properties and engineer a novel class of therapeutic and diagnostic agents,” says Reshetnyak.

In a project with the Cancer Center at Rhode Island Hospital, the URI researchers have successfully shown that the peptide can deliver nanogold particles into the cancerous tumor. Once in place, the tiny gold particles can absorb more radiation, providing a more lethal dose to the tumor, but not to surrounding healthy cells.

“About 1.6 million new cancer patients are diagnosed annually in the U.S.” says Sternick noting that the number is expected to grow significantly, reaching 2 million cases per year in the next 10 years, a direct reflection of our aging population. Approximately 50 percent of these cancer patients will receive radiation therapy during the course of their disease.

The URI researchers are collaborating on a $1.5 million National Institutes of Heath/National Cancer Institute grant with Jason S. Lewis, chief of radiochemistry service at Memorial Sloan-Kettering Cancer Center in Manhattan, New York. “Their research is innovative and exciting,” said Lewis. “It is also timely; the understanding of the tumor microenvironment, and in particular, the pH of a tumor is believed to be important in the metastatic spread of cancer. The technology that the couple has developed could, non-invasively, predict the metastatic potential of cancer as well as or monitoring the effectiveness of potential therapies. Their technology may allow for patient personalized therapies in the future.”

Through URI’s Department of Physics, Reshetnyak and Andreev are collaborating with Rhode Island Hospital on a proposed 5-year degree program that combines medicine and physics. Students would spend four years in college classes and one year at the hospital.

“The proposed URI/RIH medical physics program now under consideration by URI is the first in New England specifically designed to closely integrate academic and clinical preparation,” said Rhode Island Hospital’s Sternick, noting that a residency requirement is required before someone is eligible to take the American Board of Radiology national certification examinations. “Because our post-graduate two-year medical physics residency training program will run parallel with the URI medical physics program, URI students will have the opportunity throughout their University experience to gain valuable experiential insights about career opportunities available to and the responsibilities of physicists working in the field of cancer diagnosis and treatment where nationwide demand for well-trained clinical medical physicists far exceeds the available supply.” One of Andreev’s graduate students, James Segala was accepted into RIH’s competitive residency program.

Once certified, graduates of the program could easily find work and high salaries at hospitals where they would calculate radiation prescriptions for radiologists. They could also opt to earn a doctorate to conduct research and teach at the university level. Or they could also go to private industry where their expertise is needed in the development of medical devices.

URI recruited Reshetnyak in 2004 as an ADVANCE Faculty Fellow, a National Science Foundation effort to the increase the number of women faculty in the science, technology, engineering fields. Andreev soon joined his wife in Kingston.

Born and educated in Russia, the couple met at a physics conference in New Orleans. They live in West Kingston with their 6-year-old daughter Stefania who entered first grade this fall.