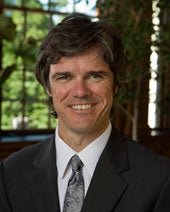 
NARRAGANSETT, R.I. – October 13, 2009 – A University of Rhode Island professor of oceanography will co-lead two studies funded with $2.4 million from the National Science Foundation to better understand several chemical and physical processes that occur in the world’s oceans.


S. Bradley Moran, who also serves as the URI assistant vice president for research administration, received funding for a study in the North Atlantic that will shed light on deep ocean circulation and for a project in the Northeast Pacific that will examine changes in the sinking rate of particulate organic carbon.


“It is a bit unusual to have two large proposals funded at the same time by the same NSF panel, so I’m especially pleased to receive these grants,” said Moran, a resident of Kingston.

In the first study, Moran and colleagues from three other institutions received $1.6 million to undertake measurements of dissolved and particulate concentrations of protactinium and thorium, two trace elements that can help to provide a timeline of the circulation of water in the deepest parts of the Atlantic Ocean.


“These naturally occurring elements undergo radioactive decay at a known rate, and it turns out that they can be used to estimate the circulation rate of the deep Atlantic. They are like natural clocks,” Moran said.


The URI professor said that large-scale deep ocean circulation is like a global conveyor belt moving warm and cool waters in consistent patterns around the world. But, he added, global warming has the potential to decrease or even shut down this conveyor belt, which would have important consequences for the Earth’s climate and marine ecosystems.


Moran’s international research team will undertake a 50-day research cruise from Lisbon, Portugal, to Woods Hole, Mass., in late 2010 to collect water samples for analysis of their protactinium and thorium content. Similar assessments are being conducted by other researchers in many other large water bodies around the world.


The second NSF grant will enable Moran and his colleagues to participate in four research cruises over two years to Ocean Station Papa, a site in the Northeast Pacific, to examine the linkages between plankton communities and the movement of carbon from surface waters to ocean sediments. 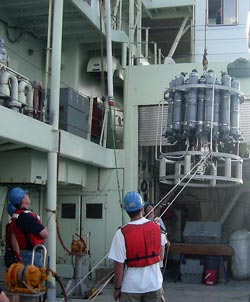 Similar to the previous study, scientists use the trace elements thorium and polonium to measure the magnitude of carbon flux to learn how much carbon in the ocean is being sequestered from the atmosphere and how much is exported from surface waters in sinking particles. But the scientific community is uncertain whether the community composition of plankton in the water may be influencing the interpretation of data from these trace elements. This project will help scientists gain a clearer understanding of the quantity of carbon dioxide from the burning of fossil fuels that the oceans can be expected to absorb and store.


“It is not easy to find a suitable oceanographic location to test these linkages, but Station Papa should do the trick,” said Moran of the site in the middle of the Gulf of Alaska. “It has a high particle flux that changes seasonally, and it has been used for a variety of other oceanographic time series studies for many years.”


Moran’s first visit to collect data from Ocean Station Papa for this project will take place next summer.