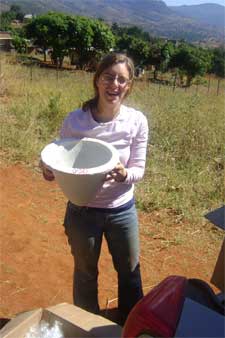 KINGSTON, R.I. – October 9, 2009 – A deceptively simple porous clay pot used as a water filter is providing new hope and improved health to HIV patients in a remote region of South Africa, thanks to the work of a University of Rhode Island graduate student.


Sophia Narkiewicz, 23, a resident of Coventry who is studying civil and environmental engineering, spent 10 weeks in Thohoyandou, South Africa last summer to test the effectiveness of the water filter on adults infected with the virus that causes AIDS. She collaborated on the project with URI Assistant Professor Vinka Craver and University of Virginia Professor Jim Smith.


“HIV patients are notorious for having very low immune systems, even if they are receiving anti-retroviral treatments, so they have a very hard time fighting off diseases caused by microorganisms,” said Narkiewicz, who earned a bachelor’s degree at URI in 2008. “They are especially at risk for contracting water-borne illnesses. It’s a matter of life or death for them and their children.”


South Africa has one of the highest HIV rates in the world, and a large percentage of the population drinks unhealthy water. Consumption of contaminated drinking water causes a wide variety of diarrheal diseases that are particularly dangerous to HIV patients and children.


Looking somewhat like a ceramic pot in which a houseplant is grown, the water filters are made with a mix of clay and sawdust and impregnated with colloidal silver. When the clay is fired, the sawdust burns out, leaving a network of fine pores through which the water filters. The filters remove or kill more than 99 percent of the bacteria in the water.


“We were testing whether an implemented water treatment project using the filters would provide a significant difference in the health of HIV patients,” Narkiewicz said. “So far we’ve seen a pretty significant difference in the health of those using the filter compared with those that don’t. There has been a major decrease in the amount of diarrhea they are experiencing. And while all the people in the study are adults, most of them have children so there are indirect benefits to their children as well.”


During her stay in South Africa, Narkiewicz teamed up with students at the University of Venda, a graduate student from the University of Virginia, and the nuns that operate the nearby St. Joseph’s clinic. Together they recruited 96 individuals to participate in the study, surveyed them about their health, water consumption and demographics, and taught them how to use the filter. University of Venda students are making regular visits to the homes of each participant until the end of the project next spring.


Narkiewicz will return to South Africa in January to assess the program at its mid-point and test to make sure the filters are still performing properly. She said that the project is providing a wealth of educational benefits, including to community members who are not participating in the study.


“We surveyed a great many people, and very few of them knew there was a connection between their drinking water and disease,” she explained. “Now they are realizing that it’s the water that had been making them sick. They all know each other, they go to the same clinic, they know others in the study, and everyone is talking about it.”


Narkiewicz, who will earn her master’s degree from URI in May, was especially impressed by the dedication of the nuns who run the clinic. They built the facility themselves, treat more than 600 people each month, and provide their patients with fresh vegetables and other highly nutritious foods.


“I learned a lot from the patients and the nuns about my values and our cultural systems and about what is really important,” Narkiewicz said.