KINGSTON, R.I. — October 22, 2009 — The University of Rhode Island opened four lactation sites this year — two on the Kingston campus and one at its Narragansett Bay and Providence campuses — and established a lactation policy. 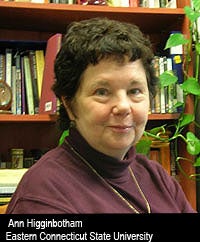 The presentation will be followed by a keynote address “Why Family Matters” delivered by work-life expert, Ann Higginbotham, distinguished professor of history, Eastern Connecticut State University. Higginbotham, chair of the American Association of University Professors Committee of Women, writes and speaks extensively on the history of women, work, and family.


Angela Slitt, assistant URI professor of biomedical and pharmaceutical sciences and mother of four children whose youngest is 10 months old, occasionally forgets her breast pump at home. But she doesn’t have to stress. She can simply pop into one of the University’s lactation rooms for 10 minutes to use its pump. “The room is a great resource,” says Slitt who recalls working at another university a few years ago where she shared an office with five other people (woman and men) and had to pump in a bathroom stall.


Her colleague Yan Sun, assistant professor of electrical engineering, agrees: “The availability of the lactation room in the Carlotti building helped me make the decision to breast feed for a longer time. I returned to work when my son was 6 weeks old, and I found expressing milk in my office difficult. My students were accustomed to finding me in my office and, even with the door closed, I did not have the privacy that I needed.”


URI’s model lactation program, which could be replicated on other college campuses, is just one of the significant strides the University has made in promoting a flexible, life and family-friendly place to work and study for men and women.


“While initiatives such as this one benefit primarily women, work-life balance is about creating a flexible workplace for everyone, “said Barbara Silver, ADVANCE Program director. “Other URI initiatives include the 2005 passage of a 6-week paid parental leave policy for faculty, which was used as a model for similar policies for many staff members. In 2008 a dual career hiring policy and guidelines were created, which has been nationally acknowledged as a model program. The Work-Life Committee has been formalized as a standing Presidential Committee, and approval has been secured to designate a part-time work-life specialist in Human Resources. In addition, the Schmidt Labor Research Center at URI is now targeting work-life balance research as a significant new focus of the center’s work.”


URI Work-Life Day was planned to coincide with National Work-Family Month (October). The daylong event, sponsored by the National Science Foundation ADVANCE program, the Elsevier Foundation, the Schmidt Labor Research Center, the URI Women’s Center, and the URI Work-Life Committee, is free and open to the public.


In addition to the award presentation, the day’s activities include two separate tours (9 to 10 a.m. and 1:30 to 2:30 p.m.) of the Mother’s Room in the Carlotti Administration building, 75 Lower College Road, Kingston. The film, The Motherhood Manifesto, will be shown in Atrium 11 of the Memorial Union, from 11:30 to 12:30 followed by a brown bag lunch panel discussion, “Issues for New Parents Returning to Work/School” in Room 318, Memorial Union.


Most pediatricians agree that breast milk is the most nutritious source of food for infants, and encourage new mothers to nurse for up to 18 months. Yet approximately one-third of mothers return to work within 3 months of giving birth, and well over half return within one year.


A serious disconnect exists between these realities and traditional workplace policies new mothers face when returning to work,” said Silver. “This dilemma provides a good example of how contemporary women’s careers can be hampered by traditional work policies and practices.”


The rapid return to work can make it difficult to sustain breastfeeding as the mother’s milk supply quickly dries up if she does not nurse or express milk at regular intervals throughout the day.


URI’s policy complies with Rhode Island legislation, which requires an employer to make “a reasonable effort to provide a private, secure, and sanitary room or other location in close proximity to the work area, other than a toilet stall, where an employee can express her milk or breastfeed her child” (R.I. Gen. Laws § 23-13.2-1).


Among professionals, women much more frequently forego marriage and family to pursue academic career success than do their male peers. For example, women who have children soon after receiving a doctorate are much less likely to receive tenure than their male counterparts, hitting what is sometimes called a “maternal wall.” This leads to increased attrition rates for women faculty, and if they do stay in academia, they more often opt for lower-paying, non-tenure line appointments and part-time work.


Progress, however, is being made. Employers like URI are beginning to respond to these work force changes by offering more flexible work accommodations. Research shows that when more supportive work/life policies and practices are available, employees exhibit more positive work outcomes, including job satisfaction, loyalty, retention, less interference between job and family life, less negative spillover from job to home, greater life satisfaction, and better mental health. As both recruitment and retention tools, policies and practices that promote work-life balance are becoming bottom-line necessities for universities and other employers across the country.


“While the lactation program primarily benefits new mothers, initiatives like this bring URI one step closer toward being a model flexible workplace for both men and women. For employers, new mothers who return to work by choice or necessity are not only valued employees, they are raising the next generation of Rhode Island workers,” says Helen Mederer, URI professor of sociology and chair of the URI Work-Life Committee. “Thus, this issue has relevance beyond personal choice, and encompasses community, state, and societal interests about building a healthy work force.


“As a mother of a 2-year old I can say that thanks to URI I am happily balancing family and work (as much as that is possible),” says Jennifer Longa Moio director of violence prevention and advocacy services. “I can’t stress enough that without the support of my supervisor and the ability I’ve had to take time off for parental leave, to go to my son’s daycare to breastfeed at lunchtime for two months when I came back to work, and to take sick time during his first year with numerous ear infections I would not have been able to continue working productively. When I speak with my peers who are often stressed about leaving sick children with caretakers, feeling that they no longer like their jobs, and who feel no balance in their lives I appreciate the opportunities I have even more.”

Link here to view a video and learn more about the grant URI received to build the Transitional Support Program and model lactation program.