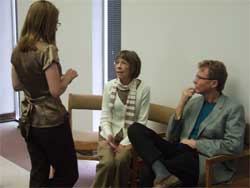 
KINGSTON, R.I. – Nov. 6, 2009 – Using four simple questions to generate client-directed feedback can greatly increase the chances that struggling couples will stay together, according to a recently published study.


According to the largest clinical trial with couples to date – which was co-authored by University of Rhode Island Human Development and Family Studies Professor Jacqueline Sparks – couples that had systematic client feedback incorporated into their sessions were 46.2 percent less likely to wind up divorced or separated.


The largest clinical trial to date, the findings of the study were published in the Aug. 3 issue of the Journal of Consulting and Clinical Psychology. Sparks co-authored the two-year study – conducted at the Vestfold Family Counseling Center in Norway – with Barry Duncan of Heart and Soul of Change Project and Morten Anker of the Family Counseling Office in Vestfold.


The team of U.S. and Norwegian researchers studied 205 randomly selected couples from southern Norway for two years from October 2005 through December 2007. The couples showed problems typical of struggling relationships, from communication problems to infidelity and physical or psychological issues. Half of the couples in the study used the client feedback system, while the other half did not.


The couples using the feedback methods used a visual scale at the start of each session to rate their well being in four categories – individual, interpersonal, social and overall. Using the Outcome Rating Scale system as a guide, approaches for therapy could be altered in real time, helping to open lines of communication between clients and therapists.

This, in turn, helped give the client a sense of ownership in their healing process.


“According to the research, when clients believe they – not the therapist – are responsible for change, results are better and last longer,” Sparks said. “In some therapy, clients can become passive and wait for the therapist to come up with the ‘magic bullet.’ If they get better, they figure it was the therapist. These kinds of situations often lead to dependency, where clients are reluctant to end treatment or get caught in a kind of treatment revolving door—after therapy they lose ground and return.”


Participants in the study were contacted six months after their final therapy session. Couples using the Outcome Rating Scale reported feeling more satisfied in their relationships, with only 18.4 percent of those couples indicating they had separated or divorced, compared to 34.2 percent for those couples who didn’t have client-based feedback incorporated into their sessions.


“The most important element for successful therapy is client engagement,” Sparks said. “When clients buy into the process, believe it will be helpful, and participate with the therapist in working on difficulties, they will have better outcomes.”


“We know that therapists vary significantly in how skilled they are in engaging clients,” Sparks said. “In our study, when poorer performing therapists asked for and used client feedback, they improved enough to rank with the best performing therapists. So, therapist variability was reduced, with feedback being the leveler. When this happened, given that our sample was large enough to actually tell us something, we found the superior effect for feedback couples.”


Sparks teaches this outcome management protocol as a training model in URI’s masters program in couple and family therapy. For more on outcome and session rating scales, visit http://heartandsoulofchange.com.

URI Professor Jacqueline Sparks (left) and Barry Duncan of Heart and Soul of Change Project (right) talk with a student in the Human Development and Family Studies program at the University during Duncan’s visit to the campus last spring.