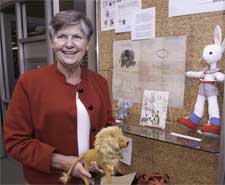 
KINGSTON, R.I.–November 24, 2009–Like her grandmother and mother before her, Roberta Hale has always loved sewing. The first items she stitched together were clothes for her dolls. She was 8 or 9 at the time.


After decades of sewing and after earning Master Seamstress I and II Certificates from URI, Hale has combined her volunteerism with her sewing skills to create an aptly named exhibit, LIONS and TIGERS and…DOLLS now on display in the cases just outside the University Library’s Special Collections Unit. Special Collections Librarian, Associate Professor Sarina Wyant, curated the exhibit, which will run to the end of January 2010. The library is located at 15 Lippitt Road, Kingston. The exhibit can be viewed during normal library hours http://www.uri.edu/library/hours/fall-urihours.html.


Hale created the stuffed toys from patterns housed in the Commercial Pattern Archive. With more than 40,000 patterns dating from 1868 to the present, the collection is the largest in the world. For the past five years the Wickford resident has helped the collection’s curator, Joy Emery, scan and catalogue the patterns. 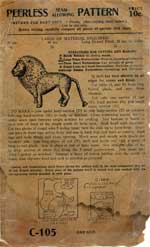 “My favorite is the lion,” says Hale who created the stuffed king of the jungle from a circa 1909 Peerless pattern. “The directions called for plush fabric for the mane so I used a piece of scrap fleece I had, which I think works nicely.”


Hale also created an elephant pincushion from circa 1945 designed for young girls to make for their mothers, and two black and white costumed dolls from a 1925 pattern joined by black thread. The dolls, Mitzi and Ritzi, were used as automobile ornaments.


She used a magic marker to create stripes for a stuffed Tigger of the Winnie the Pooh fame from a 1965 McCall’s pattern. The stripes kept getting smudged. Emery, a URI professor emerita of theatre and former adjunct professor of textiles, fashion merchandising and design, suggested Hale use hair spray. It worked like a charm.


“I’ve learned so much about the history of fashion from Joy and the patterns,” says Hale. “I know what to look for when dating a pattern. For example, if the sleeves are styled and really detailed, the pattern was created during the 1930s. If a pattern for a skirt uses a slimmed down amount of material, it was made during World War II when fabric was rationed. If the shoulders are wide, the pattern was made in the 1980s,” says Hale making a face. “Not my favorite time period.”


Although she doesn’t usually make toys – she loves to make jackets and coats for herself and her daughter–Hale does enjoy making America Girl clothes for Emery’s granddaughter Maya. “Maya calls her ‘Mrs. Santa’,” Emery says with a laugh.

ABOUT THE COLLECTION: URI’s archive, designated as a project of the Save America’s Treasures, represents more than 80 pattern companies and includes clothing patterns for women, men, and children –bloomers, men’s suits, children’s sailor suits, and bathing suits among them. The archive also includes household items such as lampshades and flyswatters.


“All of the patterns are expressions of their time period and reflect the society in which they were made,” says Emery who fields calls and emails requesting patterns and information from theater designers, clothing designers and manufacturers, social historians, and museum curators around the world. Hollywood called her a couple years ago to research appropriate 1970s men’s styles for a gangster movie.


About 90 percent of the collection is completed and available online. The abridged version is available on disc. Prices and order forms are available at www.uri.edu/library/special_collections/COPA under “order now.”

Roberta Hale of Wickford, Rhode Island with some of the stuffed toys she created using from toy patterns in the University of Rhode Island Commercial Pattern Archive. URI Photo by Michael Salerno.