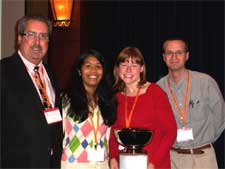 KINGSTON, R.I. – November 16, 2009- Answer: “University of Rhode Island pharmacy students.” The Question: “Who are the winners of this year’s annual Pepto Bowl?”


Endowed by Proctor & Gamble, the maker of Pepto-Bismol, this was the second year of the competition that tests pharmacist skills related to self-care counseling and over-the-counter drug knowledge.


It was held at the Mohegan Sun in Uncassville Conn. URI students Srilatha Vallabhaneni of Hopewell Junction N.Y., Caitlin Lucy of Bangor, Maine and URI alumnus Michael Hanley of Warren defeated defending champions the University of Connecticut, as well as two branches of the Massachusetts College of Pharmacy and Health Sciences and Northeastern University.


“The most exciting part of the competition was the final question,” Vallabhaneni said. During the last phase, a panel of judges had already evaluated each of the other teams and the URI team was the last to be evaluated. “All the other teams had answered correctly, and we knew if we were to also get the answer correct, we would win the game.”


It was an exciting day for students and faculty as well, as several URI faculty members were involved with the event. Professor Jef Bratberg entertained an early-morning crowd as the host of the event for the second year. As a steering committee member, Kelly Orr worked with faculty from the other New England schools regarding pre-production aspects of the game. Brett Feret served as one of five scorekeepers and Pharmacy Dean Ronald Jordan served as a judge.


“Knowledge of over-the-counter medications and counseling of patients on appropriate self-care is a critical skill for successful practitioners,” Jordan said. “When pharmacists can help people make appropriate medicine-use decisions, we are adding value in health care delivery. I’m proud we won the second year of the competition, demonstrating that the URI College of Pharmacy provides the leading pharmacist skills development training in the region,” Jordan said.