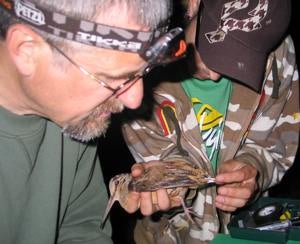 Analysis of habitat use could lead to better forest management practices


KINGSTON, R.I. – November 5, 2009 – An ecologist at the University of Rhode Island studying habitat use by a forest-dwelling game bird found that the birds unexpectedly exhibited what he described as “the bar scene phenomenon” – spending most of their time feeding and resting in one habitat and then “commuting” to a very different habitat to engage in courtship.


Scott McWilliams, a URI professor of natural resources science, said that the woodcocks he and his colleagues studied at the Great Swamp Management Area in southern Rhode Island made use of clearings in the forest to perform their courtship flight, but they then flew to more wooded or swampy areas for the rest of the day.


“The forest cutting that is done on a routine basis to provide habitat for the woodcocks is clearly important for courting birds, but many of the birds are commuting elsewhere to feed,” McWilliams said. “Maybe the clearings are good for courting but they don’t provide the earthworm eateries that the birds need for feeding. It appears that we may want to manage the forest in multiple ways to provide appropriate habitat to satisfy all of the birds’ needs.”


Brian Tefft, a wildlife biologist for the state of Rhode Island and a partner in the research project, has been cutting 10-20 acres of the forest at the Great Swamp about every five years to create habitat for the woodcock and other species of wildlife that prefer early successional forest habitat that results as the forest begins to grow back in succeeding years. McWilliams, Tefft and several students have tracked the birds’ use of the parcels in each of the last two breeding seasons. It is in these forest openings that they observed woodcocks exhibiting their elaborate courtship flight, circling high in the sky and then plummeting to the ground in a series of zigzags.


“Clearly they need these open, cut areas for courting because their displays are designed to be seen by potential mates,” said McWilliams. “The open areas are also good for avoiding some predators.”


The new growth that follows the forest clearing also provides an increasingly rare habitat for a wide variety of declining species, including the New England cottontail, ruffed grouse, and numerous songbirds like golden-winged warblers, eastern towhees and field sparrows.


McWilliams, Tefft and URI colleagues Peter August, Thomas Husband and William Buffum are now expanding the woodcock research project to other locations in Rhode Island and collaborating with biologists in other states in an effort to learn how best to manage forests for these species. The researchers are beginning by surveying other lands throughout the region that have been managed in a similar way.


“This will give us a historical perspective so we can understand what forest management practices have been done in the past and what steps have been successful in creating ideal habitat for woodcock,” said McWilliams.


The biologists will then track woodcock year-round to learn more about their breeding success and their health on their wintering grounds. Their results can then be compared with the results from other biologists in the Northeast who are using the same protocol to study the birds in their regions.


The research is being funded by a $300,000 grant from the U.S. Department of Agriculture through the McIntyre-Stennis Act, which supports research about the forested landscape. The program will also include various outreach efforts to owners of forested lands, such as the Rhode Island COVERTS program, to educate them on how best to manage their properties to improve habitat for wildlife.

State biologist Brian Tefft and URI student Jeff D’Arrigo attach a tracking device to a woodcock as part of their research on habitat use by the forest-dwelling game birds.