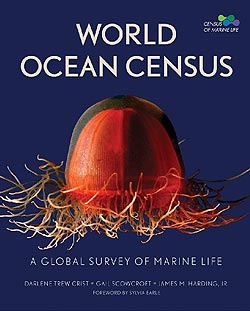 NARRAGANSETT, R.I. – November 23, 2009 – Three colleagues affiliated with the University of Rhode Island Graduate School of Oceanography have collaborated on a new book about the ten-year effort to survey life in the world’s oceans.


World Ocean Census: A Global Survey of Marine Life recounts the massive undertaking and the exciting findings of the Census of Marine Life, an international collaboration of more than 2,000 scientists from 82 nations seeking to assess and explain the diversity, distribution and abundance of life in the oceans.


The book was written by three Rhode Islanders: Darlene Trew Crist of North Kingstown, an award-winning writer and director of communications for the Census of Marine Life, which has its outreach activities based at URI’s Office of Marine Programs; Gail Scowcroft of Narragansett, associate director of the Office of Marine Programs and executive director of the National Centers for Ocean Sciences Education Excellence; and James Harding of South Kingstown, a former URI marine scientist.


“It has been a privilege to tell the story of this incredible undertaking,” said Scowcroft. “The scope of the Census’s research on ocean life is unprecedented, and its findings will impact ocean science research for years to come.”


Launched in 2000, the Census of Marine Life will release its final report in 2010, but World Ocean Census gives readers a preview of some of its findings. For example, the book notes that 90 percent of all large fish, such as tuna and swordfish, have disappeared in the last 50 years; one quarter of the world’s coral reefs have died due to pollution, destruction and increasing temperatures; and there are more than 400 dead zones around the world that affect more than 98,000 square miles.


There is good news reported in the book as well, including the fact that the Census has identified 5,300 marine species that may never have been found before, including the deepwater jellyfish discovered in the Canada Basin and the blue-eyed hermit crab captured off the Northwestern Hawaiian Islands.


Published by Firefly Books, World Ocean Census is illustrated with dozens of beautiful color photographs of exotic undersea habitats and some of the newly discovered species identified by the Census.


“In 2010, the Census of Marine Life will deliver the first ever comprehensive catalog of life in the world’s ocean that will serve as a baseline against which future changes can be measured,” said Crist. “The Office of Marine Programs at URI’s Graduate School of Oceanography will take the lead in presenting these results to the world, an example of URI’s global leadership in ocean science research and education — not only thinking globally but acting globally.”


National Geographic Explorer-in-Residence Sylvia Earle wrote in the foreword to the book: “Some will treasure the World Ocean Census as a valuable reference, others as a place to find white-knuckle adventures. The images alone will cause many to re-evaluate their concepts of what astonishing forms are embraced within the bounds of what constitutes an eye, a heart, a body of living tissue…Above all, the breakthroughs in knowledge gained, and awareness of the magnitude of what remains to be discovered, inspire hope that the greatest era of ocean exploration – and ocean care – will now begin.”


Darlene Trew Crist will be available to sign copies of World Ocean Census on Dec. 4 from 11 a.m. to noon and 1 to 2 p.m., before and after a lecture by Census of Marine Life Steering Committee member Enric Sala at the URI Coastal Institute Visitor’s Center Auditorium in Narragansett. For more information about the lecture and book signing call 401-874-2611.