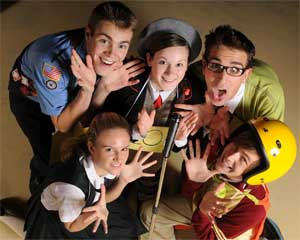 
KINGSTON, R.I. –November 23, 2009 –The University of Rhode Island Department of Theatre will present the Rhode Island premiere of the musical, The 25th Annual Putnam County Spelling Bee in December.

While the title tells you the plot, the play is character driven. The six adolescents in the throes of puberty, overseen by grown-ups who barely managed to escape childhood themselves, learn that winning isn’t everything and that losing doesn’t necessarily make you a loser. The play’s music and lyrics were written by William Finn and the book by Rachel Sheinkin.


Admission is $18 for the general public, $14 for senior citizens and URI faculty/staff and $12 for students. Tickets can be purchased by calling 401.874.5843 beginning November 23 or online at www.uri.edu/theatre.


The show’s Tony Award-winning creative team created the unlikeliest of musicals about the unlikeliest of heroes: a quirky yet charming cast of outsiders for whom a spelling bee is the one place where they can stand out and fit in at the same time. “The lovably, entirely adorable new musical….Spelling Bee is, in essence, A Chorus Line with pimples.” – The New York Times.


The Sunday, Dec. 12 performance is dedicated to the memory of Thomas R. Pezzullo, a former vice president for University Relations at URI and frequent actor who died in 1992 at the age of 49. All proceeds from that performance will go directly to the Thomas R. Pezzullo Memorial Scholarship Fund. The Theatre Department was pleased to award scholarships from the fund this year to Alyssa Opishinski of East Greenwich and Jennifer Michaels of Stonington, Conn.


ADDED ATTRACTION: To add to the enjoyment of the play, celebrity spellers will participate in the performances. Here’s the line-up so far:


Three audience members will be selected at each performance to go up on the stage and spell with the actors. Anyone interested in being considered as a speller should arrive early to fill out a card in the lobby. Audience members, says director McGlasson, should come with a sense of humor and competition.


Members of the casts, their characters, and hometowns are:

University of Rhode Island students (clockwise)Autumn Gillette of Manchester, Mass., Andrew Burnap of Wakefield, Betsy Rinaldi of Coventry Benjamin M.S. Grills of Ashaway, and JonPaul Rainville of West Kingston star in URI’s production of The 25th Annual Putnam County Spelling Bee. The play will be performed in the Robert E. Will Theatre, Fine Arts Center, 105 Upper College Road, Kingston Campus. It runs Dec. 3 through 5, Dec. 10 through 12 at 7:30 p.m., Dec. 5 and Dec. 12 at 2 p.m., Dec. 6 and Dec. 13 at 3 p.m. Admission is $18 for the general public, $14 for senior citizens and URI faculty/staff and $12 for students. Tickets can be purchased by calling 401.874.5843 or online at www.uri.edu/theatre. URI Theatre photo by Randy Osga