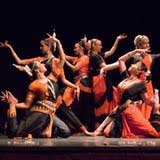 KINGSTON, R.I. – December 1, 2009 – If you thought the big dance segments in Bend it Like Beckham and Slumdog Millionaire looked like fun, the last program of the Demystifying India Honors Colloquium at the University of Rhode Island will give you a chance to join in an authentic Indian folk dance.


Neena Gulati & the Triveni Ensemble of Brookline, Mass. will present the “The Divine Rhythms” portion of the program while the Parijat Desai Dance Company of Brooklyn, N.Y. will perform “Folk Expressions,” Tuesday, Dec. 8 at 7:30 p.m. in Edwards Auditorium, 64 Upper College Road, Kingston. Some of the Honors Colloquium students will perform a short dance at the end of the program, which is free and open to the public.


As a public health precaution, the University asks those with influenza-like symptoms on the day of the program not to attend, but rather watch the evening program live online via the Demystifying India website at www.uri.edu.


Colloquium coordinators Ruby Roy Dholakia and Nikhilesh Dholakia, URI professors of marketing, and Arun Shukla, URI professor of mechanical engineering, hope to involve the audience in a rousing Indian folk dance to wind up the event.


“The three dance forms—classical and traditional (Triveni), fusion (modern and classical, Indian and western and folk (Bhangra)—continue the richness and variety of the Indian experience that has been part of the entire Demystifying series,” Ruby Dholakia said. “The dances reveal the traditional (mystical), the popular and the forward-looking perspectives of the Indian people, culture and economy.”


The Triveni Ensemble’s director, has performed Neena Gulati, was born in New Delhi, India and began dancing at age 4.


Receiving critical acclaim throughout India and the United States, she performed at the United Nations General Assembly in 1964. She moved to the United States in 1967 and has taught at Brown University and other schools in New England. Gulati has collaborated with many artists of different disciplines, including actors, musicians, dancers and poets.


In 1993, The Boston Globe described her as “a pioneer in bringing classical Indian dance in all its nuance to New England.”


The Parijat Desai Dance Company, which began in 2000, performs an elegant hybrid of Indian classical and modern dance, which the New York Times has called a “seamless blending of the new and old.” As choreographer and artistic director, Parijat Desai brings together the sculptural lines, intricate rhythms and theatricality of Indian classical dance with the dynamism and conceptual experimentation of modern dance.


For further details about the colloquium, including an updated schedule and information on parking, go to uri.edu/hc or contact the URI Honors Center at 401.874.2381 or debg@uri.edu.

Major colloquium sponsors are: The Honors Program, Office of the President, Office of the Provost, College of Business Administration, College of Arts & Sciences, College of Engineering, Division of University Advancement, The Anthony J. Risica Lecture Series on Innovation & Entrepreneurship, and The Village Inn – Narragansett.