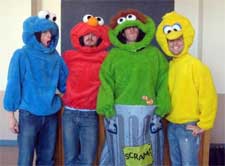 KINGSTON- December 22, 2009- Students of the Independent Transition Academy, a program for 18- to 21-year-olds with disabilities located on the University of Rhode Island Kingston campus, have learned lessons they never expected during games of kickball and shooting pool with URI fraternity brothers.


Along the way, the fraternity members learned a great deal, too.


Starting in September, the bothers of the Zeta Beta Tau fraternity met regularly with nine academy students in the Ram’s Den. “Meeting them for the first time, we were a little uncertain, having never worked with disabled students before,” said Matthew Brum of East Providence and member of ZBT. “But they’re really fun and you forget they have a disability.”


It was just the beginning of a mentoring partnership between the school and the fraternity that is expected to continue.


Mentoring and service are at the core of ZBT’s values and this latest project is one of many mentoring initiatives launched over the years with younger students. The brothers had the opportunity this year to partner with the students of the academy to help them transition from high school to college.


The Independent Transition Academy, a part of the South Kingstown School Department, provides services for students with mild to moderate disabilities as they transition from school to post-secondary experiences. The mission of the academy is to prepare students to become independent, responsible participants in their communities. Life skills, from cooking to balancing a checkbook are among the activities designed to help them integrate smoothly and to live independently. Another goal is to increase students’ involvement in, knowledge of, and access to, community resources. Through programs like the ZBT mentoring effort, the University has become a resource for the school.


“The ZBT brothers were very welcoming,” said Jennifer Harris, academy program coordinator. “Most of our students have disabilities that affect them socially. Being on the URI campus is a great location because we can show our students what the real college experience can be like and what to aspire to,” Harris said.


“My goal is to go to college and reach my full potential,” said one of the academy students.


Throughout the semester the fraternity brothers spent time with the academy students. “They look forward to each week when they spend time with the ZBT guys. It has had a great impact on them socially,” said academy job coach Kathleen Royles.


They eat lunch together and shoot some pool in the Memorial Union and have even played some board games at the chapter house. One of the students’ favorite experiences was being welcomed to the ZBT chapter house for a tour.


“I think hanging out with us gave them confidence, they were really shy at first,” said Julio Quinonez, ZBT member, of Providence. 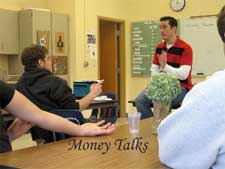 The ZBT members were also able to help the academy students show the campus what they are up to by reserving a booth in the high-traffic area of the Memorial Union and helping sell bakery products made at the academy.


“They have so many connections. They know everyone,” another academy student said of the ZBT brothers. “They treat us with respect, and I feel like they’re big brothers to me.”


The brothers of ZBT have even begun to get the students excited about the idea of college and their futures by offering presentations on things that correlate with what they are learning. Royles said the students see the brothers as strong role models.


“I talked to them about the process of opening a business and how to make money grow,” said ZBT President Michael Lonardo of Cranston. “It was very interactive and they had a lot of questions about stocks and bonds and the whole process. Beyond the presentation, mentoring these students has been very rewarding.


“After the meeting, one of the students asked me for advice with a girl and I stood there and talked to him for a while about it. I could tell he just wanted to talk to a guy about it. I’m not a teacher and he just wanted someone on his level and I felt really good about it, too. I smiled the rest of the day knowing that he looked to me and I could help the guy out.“


“It’s great that they can be around guys their age that they can confide in and look up too,” Royles said. “When our students are around greatness, they aspire to it.”


The academy students are looking forward to what will come from hanging out with the guys next semester. They are excited to learn as much as they can from them.


“Maybe we could go to class with them one day,” an academy student said. “That would be really great.”


After working with the academy students for a few months, the brothers wanted to do more. To raise money for the academy, they got creative by making use of amusing Halloween costumes. They contacted Thomas Dougan, vice president of Student Affairs, Stephen Simo, coordinator of Greek Affairs, Dan Graney, director of Substance Abuse Prevention and Jason Pina, dean of students, to get them in on the plot as well.


From Nov. 17 until Dec. 4, URI community members were asked to vote for the URI administrators and ZBT brothers they most wanted to see dress up as Sesame street characters. They voted by placing coins in jars with photos of each participants face taped on them.


On Dec. 4, the “winners” dressed as Elmo, Big Bird, Oscar the Grouch and the Cookie Monster for the entire day to show their support for the academy students.


Funds raised will provide supplies to assist these students in achieving a more independent lifestyle.


“During our Thanksgiving lesson one of our students said he was thankful for his ZBT brothers,” Harris said. “They are an impressive group of young men, and we all look forward to working with them more.”


Note to Editors: Names of the Transition Academy student were withheld because of privacy law cited by the South Kingstown School Department.


FINANCIAL TIPS: ZBT President, Michael Lonardo talks to academy students about business and how to make a profit.