News Note: The unusual new book by English Professor Mary Cappello, Swallow: Foreign Bodies, Their Ingestion, Inspiration and the Curious Doctor Who Extracted Them, has produced quite a following. Prof. Cappello’s research and her book were featured in the January 11 New York Times, Seattle Times and numerous other affiliated newspapers nationwide, the Los Angeles Times on January 7, Salon.com, December 21 and on radio programs in Vancouver and New Zealand. Following is the November 2010 URI news release about the book.


KINGSTON, R.I. – Nov. 29, 2010 – Plenty of people have swallowed coins. What about a beaded crucifix, or nails and screws? Safety pins, porcelain dolls and a toy goat? All that and much more shows up in University of Rhode Island English Professor Mary Cappello’s latest book, Swallow: Foreign Bodies, Their Ingestion, Inspiration and the Curious Doctor Who Extracted Them (The New Press).


It was during a trip to the Mütter Museum at the College of Physicians of Philadelphia more than four years ago that Cappello came across the Chevalier Jackson Foreign Body Collection, which caused her to explore Jackson’s cabinet of curiosity.


A founding contributor to the science and art of modern endoscopy, Jackson extracted foreign objects from thousands of patients. Cappello – who is a Los Angeles Times bestseller for her book Awkward: A Detour – used three fundamental questions for the basis of the book: How does someone swallow the foreign objects? Who was Chevalier Jackson? What do the objects become once deposited into Jackson’s curious collection?


Her goal was not to offer a definitive piece on the life and career of Jackson, but to peel away some of the layers behind the stories of the objects themselves.


In keeping his collection, Jackson made sure to document how old the patients were, how long the foreign objects were lodged in their stomach or lungs, how long it took to remove each object and whether or not the patient had survived the object extraction. Remarkably, Jackson had a near-perfect success rate of removing objects without causing injury or death to patients. This despite not using anesthesia.


“Jackson had a way of being able to calm patients down, especially children,” Cappello said. “He used rigid, brass instruments without the use of general anesthetics. He proved that the human body is more capacious than we tend to think.” 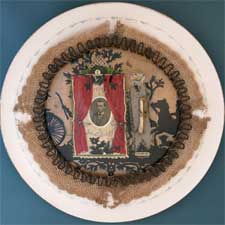 While the Jackson Collection displays the objects and basic information about each case, Cappello dug deeper to find the stories behind many of the ingested objects.


Comparing it to finding a needle in a haystack, Cappello researched many of Jackson’s cases through archives held at the National Library of Medicine in Bethesda, MD. She found more than 40 boxes filled with detailed accounts of Jackson’s patients, such as the 9-month-old boy who survived despite having been forced to swallow safety pins, buttons, cigarette butts and more.


“Reading the background on many of the cases proved to be shockingly illuminating,” Cappello said. “Jackson often reduced the presence of foreign bodies to carelessness, and he didn’t really take into account the complexity of human psychology. There was accidental ingestion, purposeful ingestion, forced ingestion and in some cases phantom ingestion, where people were imagining and even showing symptoms that they had swallowed something that wasn’t there.”


In the course of her research, Cappello came across a Pennsylvania woman named Margaret Derryberry who had inhaled a pin as an 8-year-old child. Jackson’s team had removed the pin, and many years later, as an 80-year-old woman, Derryberry had contacted the Mutter Museum trying to track down the pin.


“I got to meet Margaret and forge a friendship with her because of a foreign object,” said Cappello, who had just learned she had breast cancer when she met Derryberry.


Derryberry passed away before Swallow came out, but the relationship will stay with Cappello forever.


“When you do this kind of research, you start to meet people and get to know a deeper history about them, and it opens up worlds of possibilities and relationships that you could not have previously imagined,” Cappello said.


Though it officially comes out after the New Year, Swallow: Foreign Bodies, Their Ingestion, Inspiration and the Curious Doctor Who Extracted Them is available on amazon.com now. Publisher’s Weekly gave the book rave reviews, saying Cappello “brings a poet’s sensibility and a journalist’s fascination to the modern history of foreign body ingestion…” with her book.


In October, Cappello and San Francisco-based artist Lisa Wood collaborated on an illustrated reading titled “Swallowed and Saved: The Chevalier Jackson Foreign Body Collection and the Art it has Inspired” at the Observatory in Brooklyn, N.Y. Wood’s series of assemblages, called “The Swallowing Plates,” were also inspired by Jackson’s career.


In addition to the book, Cappello is working with the Mütter Museum’s curator, Anna Dhody, to conceive a newly informative design for the Chevalier Jackson Foreign Body Collection at the Mütter Museum. The re-opening of the exhibit is slated for February 18, 2011, which will coincide with the official launch of the book.

San Francisco-based artist Lisa Wood created the piece “Case No. 5, Rabbit Bone” as part of her series from The Swallowing Plates collection, which was inspired by the work of Chevalier Jackson. Photo courtesy of Lisa Wood.