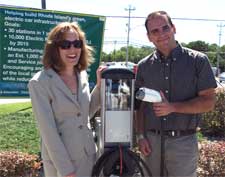 
KINGSTON, R.I. – December 15, 2010 – When Wendy Lucht became the coordinator of the Ocean State Clean Cities Coalition in 2008, the group that advocates for alternative fuel vehicles and petroleum reduction measures in the transportation sector had been virtually inactive. Now it is attracting attention from researchers, the auto industry and fleet managers, and Lucht has been recognized by the U.S. Department of Energy with its Rising Star Award.


“Our aim is to reduce petroleum use by advocating for a portfolio of technologies, the cornerstone of which is the promotion of alternative fuels – electricity, biodiesel, compressed natural gas, hydrogen, propane and ethanol – and alternative fuel vehicles,” Lucht said. “While the program is fuel neutral, it’s a grassroots effort. We promote the fuels that make the most sense for our area, which means that biodiesel from recycled vegetable oil is a priority right now, and electricity is a promising technology.”


Based at the University of Rhode Island and funded primarily by DOE and the Rhode Island Office of Energy Resources, Ocean State Clean Cities got its start in 1998 as one of 87 similar coalitions launched as a result of the Energy Policy Act of 1992. The group organizes stakeholder meetings and outreach events and works to identify funding sources for alternative fuel projects, like electric vehicle charging stations, biofuel fueling stations, and the deployment of alternative fuel vehicles by state agencies and corporate fleets.


Lucht said that the group’s most successful event to date was an electric vehicle conference in October that attracted a wide range of stakeholders to discuss policies to promote electric vehicles, review the status of vehicle battery research and related technologies, and build awareness about plug-in vehicles.


One unexpected outcome of the event was that Lucht’s intern, Zach Heir, a senior at URI from Harrington Park, N.J., was offered a job by one of the companies in attendance. Heir had served as a Clean Cities intern funded by the Argonne National Laboratory since last summer, and planning the conference was his primary responsibility.


“We worked on this project for months, and it was a tremendous success,” said Heir. “It was the first event of its kind in Rhode Island to bring people together to talk about this new exciting technology. Wendy gave me free reign to engage people and see if they wanted to be part of the program, and thankfully a lot of people responded positively.”


“I’m grateful to Dattco that they have faith in me to help carry them into the future of transportation,” Heir said.


Lucht, who describes herself as a tree-hugging environmental wonk with a background in environmental policy, is equally grateful for the reception she has received from the transportation industry in the region. The DOE Rising Star Award recognizes her leadership in the New England region and her successful efforts to revitalize the Ocean State Clean Cities Coalition.


“Before I came, we had a period of inactivity, but now when I organize these events, lots of key players from the industry come and we’ve gotten some great attention,” she said. “Now we’re back on track and making great progress toward a cleaner transportation sector.”