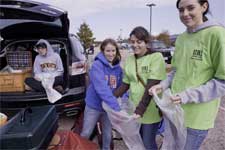 KINGSTON, R.I. – December 23, 2010 – It was a long day of collecting bottles and cans, sorting through dumpsters, weighing recyclables and educating fans, but the members of the University of Rhode Island’s Student Action for Sustainability group have a great deal to be proud of for participating in the Game Day Challenge.


The event, sponsored by the U.S. Environmental Protection Agency, pitted 80 student teams from across the country in a recycling contest at a home football game. And while the URI team didn’t finish near the top of the standings, they learned what steps the university and its fans must take to increase their recycling rate and have a better outcome next year.


“The goal was to promote waste reduction, produce less waste, and recycle as much waste as possible,” said Heather Lewis, a URI senior from Hampstead, N.H., who is the president of the student group. “It was a good first step and a good opportunity to see where we can improve in the future on recycling and waste management at big events like football games.”


The students entered the competition at the urging of Marsha Garcia, the University’s sustainability officer, who helped them with logistics, and with the support of Dave Lamb, utilities engineer, who provided the team with t-shirts, a scale and other supplies. They chose the homecoming football game in late October as the day for the competition because it draws a bigger crowd than most other games and because many other events take place before and after the game as well. 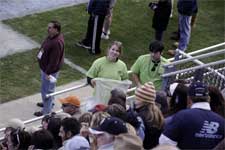 The nine members of the group who participated passed out recycling bags to every car entering the tailgating lots, walked up and down the stands during the game to collect recyclables from fans, and scoured the stands again after the game for remaining recyclables. Then they weighed all of the recycled materials and weighed all of the other trash generated at the event to submit to the competition judges.


All told, fans generated about one pound of trash per person while recycling .068 pounds per person for a diversion rate of 6.3 percent.


“One thing we learned is that most of the waste generated at a football game comes from the tailgating area,” Lewis said. “People bring their own food and lots of other stuff that ends up being thrown out, so that’s an area where we really need to focus on in the future. There wasn’t much waste generated in the stadium at all; the trash cans were barely filled.”


Based on the university’s ranking compared to other schools, URI fans generated much more waste per person than most other universities, but their per capita recycling put them in the middle of the pack.


“At the end of the day, we could definitely see where our problem areas are,” said Lewis. “We need more recycling bins in the tailgating lots so it’s more convenient for people to recycle there, and we need better marked recycling bins within the stadium. It’s not that people don’t want to recycle, it’s that they’re only going to do it if it’s convenient.”


Lewis said that the members of Student Action for Sustainability look forward to working with the University to figure out how to produce less waste at future games, since that was the area at which URI scored lowest.


“We didn’t come in dead last, but we were closer to the bottom than we’d like to be,” said Lewis. “Football is such a big thing at so many other schools, and they have more resources to put towards cleaning up and recycling at games. But in general, I think that most people don’t necessarily think about recycling when they’re at an event like this. I’d like to try and change that and make our fans more aware of recycling no matter where they are.”


Members of the URI group Student Action for Sustainability collect recyclable materials during a football game as part of the EPA Game Day Recycling Challenge.