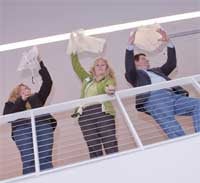 
KINGSTON, R.I. – June 2, 2011 – It’s too bad Super Grover and Bert and Ernie weren’t part of a leadership retreat last month at the University of Rhode Island’s Narragansett Bay Campus, which was designed to improve upon inquiry-based science instruction and science writing initiatives.


They would have learned how to make a mini-parachute, compete in a parachute drop and then learn about the science of gravity, inertia, drag and other factors that affect how well parachutes work.


But Grover, Bert and Ernie needn’t worry because two representatives from Sesame Street participated in the daylong event run by URI’s Guiding Education in Math and Science Network (GEMS-Net), a program that provides intense training for Rhode Island public school teachers, enabling them to use inquiry-based, hands-on science curricula with their students. The science and math network also places heavy emphasis on teaching children how to write about science.


While Sara Sweetman, director of education for URI’s science education network, has been working with the Sesame Workshop since February 2010, the retreat marked the first time the organization sent members of its team to URI. Sweetman has been working with educators, writers, and game developers from Sesame Workshop, formerly the Children’s Television Workshop, which produces the two well-known and other Public Broadcasting System shows.


Taking a few moments from the work of building a parachute during the retreat with her team, Michelle Newman, senior curriculum specialist for digital content for Sesame Workshop, said her group’s relationship with Sweetman and URI has been incredibly rewarding and beneficial.


“We are building our curriculum for the 43rd season, which begins in 2012, and it focuses on the STEM (science, technology, engineering and math) disciplines,” Newman said.


She said Sweetman has been heavily involved with all phases of that development. 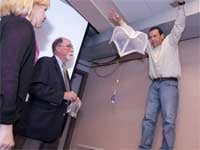 “Our relationship with Sara has been wonderful,” Newman said. “She is a wonderful resource. Not only does she have a lot of science education knowledge, she has a wonderful way of conveying that information to our teams. It’s clear she has excellent resources here at URI. So whenever we have questions, we know we can go to Sara for answers.”


Newman said the goal is to make sure Sesame Street, which focuses on children ages 2 to 4, and The Electric Company, which is for children 6 to 9, present scientific information that is based on best practices.


Sweetman was involved in all of the concepts for a Super Grover video game that teaches about simple machines.


“The game player helps Grover and his friends use a lever to get Grover in to bed. Sara was involved from the very beginning,” Newman said.


Whether informing Super Grover and his Muppet pals on how to do sound scientific research or helping teachers do the same in the classroom, collaboration is what drives the science and math education network at URI.


So in addition to the involvement of Sesame Workshop, three members of the Seattle Public Schools presented a lively discussion on writing on science and Rob Pockalny, a research scientist at URI’s Graduate School of Oceanography, discussed the parachute drop and the factors that led to successful or failed drops and the science behind the outcomes.


Betsy Rupp Fulwiler, a former editor and public school teacher, and now a science coach in Seattle schools, has developed the science-writing approach used in the Expository Writing and Science Notebooks in the district’s pre-kindergarten through grade 5 inquiry-based science program. With major support from the National Science Foundation, Fulwiler has written two books, Writing in Science and Writing in Science in Action. Fulwiler said Rhode Island is far ahead of other states because of the science education network based at URI. The University network infuses its science program with the writing model from Seattle.

“The effective way to teach reading and writing is in the content realm,” Fulwiler said. “When we make a statement in science, we have to back it up with evidence. We are developing expository writing and science skills at the same time. This kind of critical thinking not only makes them better scientists, it also makes them better citizens of the world.”


Such an approach is working for Debra Zepp, named the Elementary School Principal of the Year by the Rhode Island Association of School Principals for her performance at South Kingstown’s Matunuck School. A teacher at Wakefield Elementary School for 16 years who earned her bachelor’s and master’s degrees at URI, Zepp said her interest in URI’s science education network peaked when she participated in training at URI as a teacher in residence.


“It was so stimulating and exciting, learning from other people who were teachers in residence, and who are now school principals,” Zepp said. “We all continue to support the GEMS-Net science network and its work to help students think. When we can push students in terms of thinking and writing, that’s when we see great progress. They are able to convey their understanding and application of science principles through writing.”


She said Sweetman has provided critical assistance to teachers at Matunuck in developing science notebooks so students could write about their experiments from hypothesis to conclusion.


“Our teachers are phenomenal, and they work very hard. We’ve learned how to better integrate science, reading, and writing so they all become more meaningful.”


In addition to the representatives from Sesame Workshop, and Seattle Public Schools, the retreat brought together 70 educators, including public school teachers and administrators from Chariho, East Greenwich, Exeter/West Greenwich, Jamestown, Narragansett, North Kingstown, South Kingstown and Westerly, URI science and education professors and URI staff members from its science network. The participating districts have some of the best standardized test scores in science in the state.

BIG DROP: Educators drop their small parachutes following a science workshop at URI’s Graduate School of Oceanography as part of a daylong leadership retreat run by URI’s Guiding Education in Math and Science Network (GEMS-Net), a program that provides intense training for Rhode Island public school teachers, enabling them to use inquiry-based, hands-on science curricula with their students. From left are Faith Krause, a second grade teacher in Jamestown, Holly Manchester, a second grade teacher in the Chariho district and Jay Fogleman, URI professor of secondary education. URI Photo by Michael Salerno photography.


IT WORKS: Educators at a daylong retreat run by URI’s Guiding Education in Math and Science Network (GEMS-Net), test their parachute. From left are Amy Walker, a first grade teacher in Westerly, Victor Ventura, principal of Springbrook Elementary School in Westerly and Jim Kaczynski, (standing with arms outstretched) a grade 7 and 8 teacher in Jamestown. URI Photo by Michael Salerno photography.