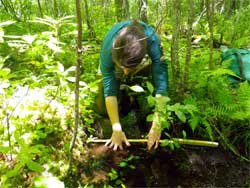 KINGSTON, R.I. – August 9, 2011 – When beavers dam a stream, they create wetlands that provide important habitat but may also generate methane gas, one of the greenhouse gases responsible for climate change. To examine the affect these ponds have on the environment, two students have spent their summer at the University of Rhode Island conducting experiments and analyzing data.


Liz Elmstrom, a Matunuck resident who attends the University of Vermont, and Molly Welsh, a URI student from Jamestown, collected sediment samples from several beaver ponds in Washington County for their analysis.


“We know where most of the direct sources of greenhouse gas emissions are coming from,” said Elmstrom, “but no one has really looked at these smaller natural sources. We’re pretty sure beaver ponds aren’t a major source of methane, but it’s still important to understand this source and its contribution to the net assessment of greenhouse gases.”


Elmstrom kept her sediment samples in a mesocosm, a glass container that mimicked the natural environment and that was stored in a climate-controlled chamber where she measured the amount of nitrous oxide, methane, and carbon dioxide each sample emitted. She found that one pond emitted much higher levels of greenhouse gases, which she believes is because of its composition of organic matter and because the water was warmer and more stagnant than the others. 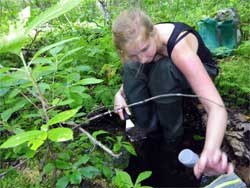 Welsh studied the same three beaver ponds, but she compared them with nine impoundment pools in headwater streams to find the microbial “hotspots” where the most biogeochemical cycling occurs. Hotspots serve as both a source and sink for carbon, nitrogen, phosphorus and sulfur and are areas where greenhouse gases can be generated. However, hotspots can also aid in the degradation of pollutants, heavy metals, and pesticides. She found a great deal of variation in microbial biomass values, but some sites were clearly hotspots for microbial activity. Welsh hopes this research will bring more attention to studying and protecting these microbial hotspots that are so valuable for nutrient cycling and reducing pollution levels.


The students’ research was made possible by the federally funded Experimental Program to Stimulate Competitive Research (EPSCoR), a program of the National Science Foundation. They reported the results of their research last week at the Rhode Island Summer Undergraduate Research Fellows conference. The conference is a collaborative program of EPSCoR and the Rhode Island IDEA Network of Biomedical Research Excellence, both of which place undergraduates in hands-on research experiences in laboratories throughout the state.


“It is a very beneficial program,” said Welsh. “It completely immerses you in the lab and field components, and all of the mentors are so supportive.” The students received enormous support and guidance from Kelly Addy, the URI Watershed Hydrology Lab coordinator, and Julia Hyman, a doctoral student at URI.


“The students in our programs are not just dishwashers,” said Arthur Gold, a professor in URI’s department of natural resources science and the advisor to Elmstrom and Welsh. “They are getting an understanding of what goes on in this field, how research happens, and being a part of a team trying to solve a problem.”

URI student Molly Welsh collects some data for research she is doing on the affect of beaver dams on the environment.


Matunuck resident and University of Vermont student Liz Elmstrom collects sediment samples for the research she and Molly Welsh are working on this summer.

Photos are courtesy of Molly Welsh