Skip to content
KINGSTON, R.I. – November 9, 2011 –Sara Sweetman knows how to get teachers excited about science and how to inspire young students to seek answers through the scientific method, even those in kindergarten.


The director of a nationally renowned science education network at the University of Rhode Island, Sweetman has even been at home in New York, working with the cast and crew of Sesame Street to help guide 12 of the show’s science, technology, engineering and math segments.


But she was never prepared to star in four Sesame Street episodes and the 6- to 12-hour filming sessions needed to get those segments just right.


“I never aspired to be an actor,” said Sweetman, a resident of Bristol and former Jamestown teacher who spoke while taking a break from another teacher training session at URI’s Narragansett Bay Campus. “It’s not my forte. My forte is teaching youngsters and teaching teachers how to build their science lessons on an inquiry-based model.


“I was on hand for the filming to ensure that the science was covered accurately when the education content producer and a writer asked me to jump into a scene.”


Soon, Sweetman was having on-camera conversations with Murray the Muppet and a bunch of youngsters from New York public schools. They shot in June in the New York Hall of Science, the Liberty Science Museum, Public School 138 and Central Park. 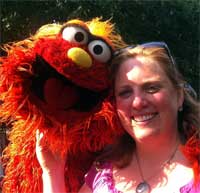 “We were in Central Park when we filmed in 90-degree heat in direct sunlight,” Sweetman said. “When we were between takes, we had to pat the sweat off our faces. We ate lots of ice cream during those days. I was amazed at the kids’ ability to stay focused on one topic for up to 6 hours. Sometimes, we did two segments in one day, which required an amazing amount of discipline by the students.”


Sweetman, who is director of education for URI’s Guiding Education in Math and Science Network (known as GEMS-NET), has been working behind the scenes with Sesame Workshop since February 2010, first in a series of seminars in New York and then continuing with regular conversations with the group that produces Sesame Street and The Electric Company.


Actors, producers, set designers, directors, game developers and those from the book divisions of Sesame Workshop, formerly the Children’s Television Workshop, learned about best practices in science education from Sweetman. Two members of the Sesame Workshop team joined the URI educator, her staff and a group of Rhode Island public school teachers last June during a workshop on improving the science network.


That behind-the-scenes work led to Sweetman becoming an on-camera talent for Sesame Street.


One segment on bubble science has already aired. With Murray the Muppet, played engagingly by actor Joey Mazzarino, Sweetman and her student team came up with an experiment to test what kind of a surface would be best for catching bubbles. Dirt, aluminum foil and soapy water were among the surfaces tested. The students with soapy water on their hands were the most successful at catching bubbles.


“One of the things Murray taught the students was how to set up an experiment that would test the variables,” Sweetman said. 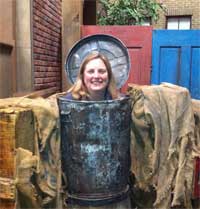 Sweetman and her student actors did not have scripts. “Because these were actual experiments the crew wanted the children, Murray and me to be in a real setting,” she said. “It was hard for the production crew because they couldn’t anticipate certain elements.


“Everybody was fascinating and a pleasure to work with,” Sweetman said. “They all have such passion. They brought out the best in the kids.


As the Sesame Workshop’s science, technology, engineering and math advisor, Sweetman said she has a deep respect for the science needed to put together a show.


“I told the crew and the kids while we were filming that STEM is all around them, even in such areas as simple machines, which is one of our lessons in GEMS-Net,” she said. “During one shoot, a camera mounted on a track kept squeaking. One of the crew came out and squirted baby powder on the track and it worked. It was a great lesson about how to counteract friction.”


So what’s the biggest lesson she learned and she wants to impart to teachers and young students? “Keep yourself open to opportunities and crazy, wonderful things can happen.”

HER PAL MURRAY: Sara Sweetman, director of a nationally renowned science education network at the University of Rhode Island, talks science with Murray the Muppet during a shoot for a Sesame Street segment. Sweetman worked with the cast and crew of Sesame Street to help guide 12 of the show’s science, technology, engineering and math segments and she appeared on four episodes that will run this season.


SHE’S NO GROUCH: Sara Sweetman, director of education for URI’s Guiding Education in Math and Science Network (known as GEMS-NET), who has been working behind the scenes with Sesame Workshop since February 2010, hangs out in Oscar the Grouch’s trash can on the set.