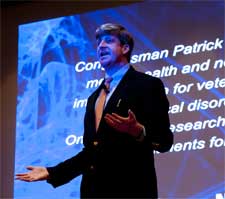 
The series continues with a lecture today, Dec. 6 at 3 p.m. at the University Club, by Patrick Aebischer, the president of Ecole Polytechnique Federale de Lausanne in Switzerland. Aebischer is known for his research on the treatment of neurodegenerative diseases using cell and gene transfer.


Kennedy referred to brain disease as the new frontier in scientific research.


“We need to find a way to track and treat dementia and other brain-based illnesses,” said Kennedy. “That is the holy grail of medical research.”


He called the brain the “highway system of basic science,” and compared the individual diseases to off-ramp exits, saying that people need to travel on the highway to get where they’re going faster. Kennedy said that everyone is affected by brain-based illnesses in some way, and the future of the economy rests on our understanding of the brain.


Kennedy said that the only way to make progress on solving this issue is if political science and neuroscience unite.


Kennedy calls the brain “the last medical frontier,” a term that he derived from the late President Kennedy’s famous moon shot speech, when he referred to traveling to the moon as “the new frontier.”


“The difference now,” said Kennedy of this new frontier, “is that we want to go to inner space instead of outer space. The neuroscientists are our astronauts.”


The United States kept John F. Kennedy’s promise of putting a man on the moon within the decade, and Patrick Kennedy plans to do the same with neuroscience research and discoveries on how to cure brain-based illnesses.


He said that the “Sputnik” in this effort that will motivate people is our American heroes. Kennedy said veterans are suffering with brain illnesses. The most significant war wounds today, even more so than typical battle injuries, are post-traumatic stress disorder and depression, which result in suicide in many cases.


Kennedy co-founded One Mind for Research, a national organization that strives to raise money to learn more about neuroscience in hopes of finding a cure for brain-based diseases by 2020. The National Institutes of Health, President Barack Obama, and the pharmaceutical industry are supporting this collaborative effort.


Kennedy said that taking a leading role in neuroscience research is a terrific opportunity for Rhode Island to stimulate its current economy by creating new jobs for tomorrow. This effort can put the state on the map globally.


To learn more about One Mind for Research, please visit www.1mind4research.org.