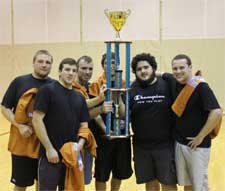 KINGSTON, R.I. — December 19, 2011 — Dodgeball may traditionally be the domain of prepubescent all-stars, but there’s nothing elementary about the New England Regional Dodgeball Tournament held at Rowan in New Jersey. Using advanced strategies and skills worthy of a 3-credit physical education course, the Saki Bombs – a collection of six University of Rhode Island students – captured the men’s championship Dec. 3 at the 19-team regional tournament.

“A lot of schools try not to let kids play it because it’s kind of seen as a bully sport, where only the strong survive,” said senior secondary education major Jeff Miszkiewicz, of Cumberland. “But if you look at our team, you’ll see that’s not necessarily true. We’re not all athletes. There’s a lot of strategy that goes into winning.”

The Saki Bombs, who also include Matt Hanson, Eric DaCosta, and Keith Hebert, all of Cumberland, Joe Laramee, of Central Falls, and Will Frost, of South Kingstown, used their brains, as well as brawn, to cruise through pool play into the single-elimination brackets as a No. 2 seed.

Each match is played in a best-of-three games format and, after dropping their first game to the host team, The Young Ramseys of Rowan University, the Saki Bombs rallied to win the next two games and never looked back, beating teams from Delaware, Rutgers, Monmouth, Kutztown and Johnson State.

Experience helped the Saki Bombs turn things around. This was their second year at the tournament — which is played with slightly different rules and a different ball than at URI. Miszkiewicz, Hanson, DaCosta and Hebert grew up playing the sport together and have participated as an intramural team at URI since they were freshman. They won the URI intramural championship in 2008. The Deparment of Recreational Services, which oversees the intramural department, helped fund their trip to New Jersey, paying for the team’s entry fee and gas.

Laramee, a kinesiology major, met Hebert, an applied mathematics major, when they were freshmen living across from each other in Merrow Hall and joined the group. Frost, who met Miszkiewicz during orientation when both were team leaders, was a last-minute replacement for former teammate Thomas Cybowicz, who couldn’t make the trip.

The tournament was a new experience for Frost, a graduate student in the College Student Personnel Program, who hadn’t played dodgeball since gym class in 2006. His baseball coach, Jim Sauro, is a physical education teacher at South Kingstown High School and didn’t like seeing his star baseball players endangering their throwing shoulders, so he wasn’t allowed to play his junior and senior years. He didn’t play at URI until Miszkiewicz asked him to fill in.

“The strategy of it was a completely new concept to me,” Frost said. “The last time I was allowed to play it was just in gym class. Here, we really tried to take advantage of my ability and Keith’s ability to throw.”

The Saki Bombs used tactics such as the cover strategy, when Hebert and Frost would stand behind other players who were stronger at catching the ball. That way, if the opposing team tried to gang up and throw multiple balls at Miszkiewicz, Hanson, Laramee or DaCosta, at least one of their throwers was in danger of getting hit by return fire from Hebert or Frost.

“When we had an advantage, we tried to turn it into an even bigger advantage,” Frost said. “It’s really about being conscious of where your teammates are at all times and knowing where the ball is going.”

With their strategies working to perfection, the Saki Bombs knocked off the Honey Badgers of Johnson State College in Vermont in the championship to capture the trophy.

The championship trophy now sits in the common room of a suite in Eddy Hall occupied by Hanson, a psychology major, DaCosta, a computer science major, and Miszkiewicz. The trio, along with Hebert, hope to pop into their alma mater, Cumberland High School, during winter break and show off the hardware to the school’s intramural director, Brien Keller.

“We’re going to head up there when school’s over and surprise him,” Miszkiewicz said. “We started our sophomore year there. We had this core group and, fortunately, a few of us all came to URI, so it was a no-brainer to continue to do what we like to do.”

For more information, call Miszkiewicz at (401) 651-6566 or email him at jmiszkiewicz@my.uri.edu, or email Frost at William.t.frost@gmail.com