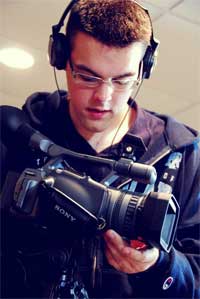 KINGSTON, R.I.- December 1, 2011 – The University of Rhode Island Film Collaborative has asked students and faculty to participate in URI’s version of the original YouTube documentary “Life in a Day” by filming and sharing their daily experiences on campus.


The three questions participants are asked to answer are: Why did you choose to come to the University of Rhode Island? What do you love? What do you fear? What is in your pockets?


Daniel Larsh, a junior from Johnston, R.I., double majoring in film and communication studies, is the president of the collaborative and has been involved with the club since its establishment in November 2010. One night while in his residence hall, Larsh saw an advertisement on YouTube to watch the “Life in a Day” documentary live.


“The film was so powerful, I was really moved and inspired by it. Others in our group saw the documentary as well and wanted to bring it to URI on a smaller scale,” said Larsh.


According to Larsh, around 30 people have responded to the “LIFE in a Day @ URI” Facebook page and others have been seen around campus filming. Larsh made his own video for the documentary and also took clips of URI’s scenery that will be played throughout the final piece. The purpose of the University’s participation, according to Larsh, is to evoke emotion and pride by giving a glimpse of what really happens on campus every day. Current students, incoming students, and alumni will all be able to appreciate the final product.


Alex Papa, a junior from Wakefield, R.I., double majoring in Spanish and secondary education, contributed a video displaying the commuter perspective of campus. He has been a member of the collaborative since September. Papa included clips of how quickly the Fine Arts commuter parking lot fills up in the morning.


“My biggest fear was filming in the classroom and the professor’s response. Some were enthusiastic, others were unwilling at first,” said Papa.


Larsh and Papa were both impressed by how above and beyond many of the students went with their message, as well as their dedication to filming the entire day from start to finish.


The University of Rhode Island Film Collaborative is still accepting documentary submissions. Some of the challenges will be walking students through the process of uploading their videos onto YouTube and editing them to their liking, according to Larsh. They are hoping to have the final project available as early as the beginning of next semester, so students can use it in their portfolios.


“From the footage I’ve seen, it’s going to be a powerful film. People told their personal stories, and what more can you ask for than that?” said Larsh.


Visit youtube.com/urifilmcollaborative to view the final product once it’s been released.

Daniel Larsh, president of the University of Rhode Island Film Collaborative, is photographed here, doing what he loves.