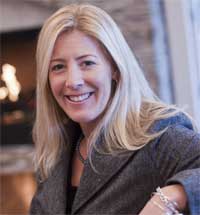 KINGSTON, R.I. – December 19, 2011 – Kerrie L. Bennett, senior communications officer for the Rhode Island Foundation, a former press secretary for Congressman Patrick Kennedy and former policy director for the office of the state general treasurer, has been named director of legislative and government relations at the University of Rhode Island.


The Cranston resident, who earned her master of business administration degree from URI, will begin her duties Jan. 5. After a national search, she was selected from a pool of nearly 50 candidates.


“Kerrie brings a wealth of experience to this position from her exceptional work in the halls of Congress, the Statehouse and with the state’s major philanthropic foundation,” said URI President David M. Dooley. “She is exactly the right person for the job as the University continues to strengthen its collaborations, particularly with state and federal government agencies. I look forward to working with Kerrie to advance the University’s mission through our efforts with the state’s General Assembly and the state’s general officers.”


In her role at the University, Bennett will plan, develop and administer overall government relations activities. She will serve as the liaison to the General Assembly, the governor’s office, the congressional delegation, the Office of Higher Education and the Board of Governors for Higher Education. She will also work closely with the president to develop strategies to address legislative needs of the University and higher education. She will advise University administrators, faculty members, and alumni and campus organizations involved with government agencies.


“We are very excited to bring Kerrie on board,” said search committee chair, Robert M. Beagle, vice president for University Advancement. ”She has built an outstanding reputation for her work in Washington and here in Rhode Island,” Beagle said. “She is at home working in government venues with leading elected and appointed officials. Indeed, Kerrie values public service and the role of the University in helping to make Rhode Island, the country and the world a better place. In all of her work, she has built strong partnerships, and we know those relationships will serve the University well. We are also proud to have one of our graduates taking on such an important role for the University.”


Bennett comes to URI with extensive experience in the public and nonprofit sectors, having worked for two members of Rhode Island’s congressional delegation and a Rhode Island general treasurer.


“Certainly, working for the University is an honor,” Bennett said. “It’s well positioned to be a major change agent and a driver for the state’s economic revival. It is such a great educational resource for our young people and the state, making us competitive in a global economy.”


Bennett said she is excited to be coming to the University at a time when institutions of higher education, non-profit agencies and business have embarked on an unprecedented spirit of collaboration.


“President Dooley and his leadership team have a vision for URI that is innovative and forward thinking, and I am excited about becoming part of a team to help advance the University’s mission.”


She leaves the Rhode Island Foundation after serving as senior communications officer for two years, working with senior leadership to advance communications for the state’s only community foundation with assets totaling more than $750 million.


From 2000 to 2004, Bennett was associate director of community and government relations and project manager for public affairs and university relations at Brown University. In those roles, she was responsible for the University’s lobbying efforts at the Statehouse and served as a representative to the Association of Independent Colleges and Universities.

Kerrie L. Bennett of Cranston is URI’s new director of legislative and government relations at the University of Rhode Island. URI Department of Communications & Marketing photo by Michael Salerno Photography.