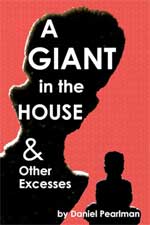 
KINGSTON, R.I. –December 20, 2011—Daniel Pearlman, a professor emeritus of English at the University of Rhode Island and master of literary fantasy, retired from teaching in 2005, but fortunately he has never put his imaginative pen away.


His latest book, A Giant in the House & Other Excesses, published by The Merry Blacksmith Press (West Warwick, R.I.), demonstrates Pearlman hasn’t lost his unique ability to create characters and situations with a funhouse mirror view of the world. Pearlman will read from the book at the Rochambeau branch of the Providence Public Library Jan. 23 at 7 p.m. The library is located at 708 Hope St., Providence. The reading is free and open to the public.


Pearlman’s ironical/fantastical stories and novellas began appearing in 1988 in magazines and anthologies. A Giant in the House & Other Excesses is his sixth book.


When Pearlman, a resident of the East Side of Providence, gets thoughts about potential stories he “grabs them by the tail before they escape, and worries them into full-blown narratives.”


One of those tail-grabbing tales in this collection, Lyonel Unbound, was drafted decades ago, but never got published. “I never let it go, finally figuring out an effective revision only a couple of years ago,” says the author.


In the story, a Walter Mitty-like English professor hustles through his carefully planned day. This day is especially important since his teaching will be evaluated to determine whether he is worthy of tenure.


However, Lyonel falls quickly off his tight schedule by being on the losing side of a fight with his wife, Laura, as evidenced by a purple bruise on his left temple. He also has had to contend with a bag filled with his clothes that Laura unceremoniously dumped off at his office.


As the elevator slowly ascended, Lyonel wondered why Laura had decided just this morning to blow up at him when she could have held off for at least another day, knowing what he was up against. He understood the daily stress she was under, counseling battered wives, but that couldn’t explain her timing.


Considering himself a reasonably good amateur psychologist, having double-majored in English and psychology, Lyonel attributed Laura’s timing to the near-certainty she felt that he was due for a thumbs-down and she wanted them both to suffer in advance to ease the pain of the inevitable.


Lyonel’s students, who in the past, have given him poor grades on their teaching evaluations, also irritate the professor. A trip to the men’s room becomes Lyonel’s undoing, particularly when his belt buckle unexpectedly breaks and his pants fall to his ankles. But not before he makes a Faustian deal with some of his devilish students, who promise tenure promoting evaluations in exchange for better grades.


The story is witty, dry, and ironic, signatures of Pearlman’s tongue-placed-firmly-in-cheek writing style. But the book’s other 11 short stories make a dozen reasons why weary shoppers should plop down for a winter’s read and laugh.


For more information about the book and how to purchase a copy, go to amazon.com.