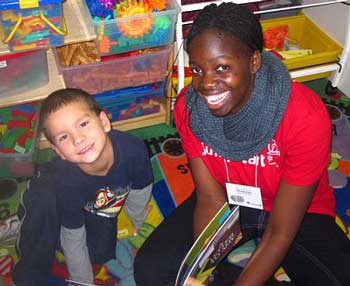 KINGSTON, R.I. – April 19, 2012 – The fight against illiteracy is being fought by students of all majors through Jumpstart, a part-time AmeriCorps program, offered at the University of Rhode Island. Students who serve for a semester or more not only gain credits through volunteer hours, they also help change the lives of children through the power of learning.


This year, there are 3,600 volunteer students nationally participating in Jumpstart. Each program across the nation implements the same curriculum geared around children’s books.


“The tough part is being able to commit four to five days a week to the program. It can be hard to balance with academic plans and experiences, which is why most of the students are freshmen. Some do find us in their junior/senior year, wanting a chance to do it before they leave,” said Catherine Cutlip, site manager for Jumpstart at URI.


Jumpstart URI has nine teams and will be adding a tenth one next year. Each team of seven to eight college students is assigned a different preschool, where they are assigned a classroom with 15 to 20 children.


“My most rewarding experience was seeing my partner child, Brendan, grow. When I met him, he couldn’t write. By the end of my time with him, he could read, spell, and make constructive sentences. I cried once our yearlong time together was over because it felt great to know I had helped so much,” said Alice Odhiambo, University of Rhode Island communications graduate who served as a Jumpstart member for one term.


Although Odhiambo was born in the United States, her family is from Kenya, which is where she lives when she is not in school. She graduated from the University of Rhode Island in May 2011 and is now back for graduate school.


“I am the fifth person in my family to attend the University of Rhode Island; my three uncles and mom all went here and my cousin has recently started attending as well. Go Rhody!” said Odhiambo.


Until her junior year, Odhiambo was a computer science major with a minor in leadership. After hearing about Jumpstart in one of her leadership classes, and completing a communications internship that summer, Odhiambo joined the following year and switched her major. She took six classes each semester and was able to fulfill the communications requirements and graduate on time.


“Before Jumpstart, I couldn’t find the right outlet or time for volunteer work. Through this program, I could volunteer and get credit for it, which was perfect. I didn’t keep my leadership minor, but I was glad that it lead me to this experience,” said Odhiambo.


According to Cutlip, because the students involved in Jumpstart spend so much time together, often, they end up living together the following year.


“After going through the same unique experiences, many of the students feel so close; almost like a family. They can really see the impact and change in the children,” said Cutlip.


“I made great connections through Jumpstart,” said Odhiambo, who volunteered at Head Start-Wakefield. “I went from eating lunch with others in my group, to living with them the following year. Not only did I make good friends, but I also developed a new respect for teachers. Their patience and effort amazed me. After doing it for one year, I couldn’t do it anymore. Kudos to the teachers.”


Jumpstart targets children in pre-school, or those between the ages of 3 and 5, while most other programs are geared toward elementary-age students.


“Usually by that time it can be too late for intervention,” said Cutlip. “Third grade is the critical level; after that point, it can be hard to catch up.”


Jumpstart AmeriCorps members volunteer at local child development centers like A Place to Grow, CANE and Joyful Learning in Wakefield, Head Starts in Wakefield and Westerly, and centers in Providence and North Kingstown. 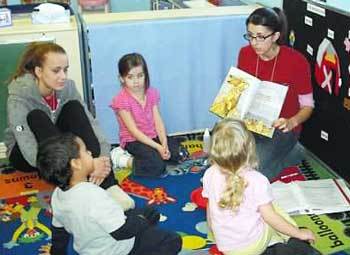 “Our activities focused on literacy. We read books, played literacy based games, like letter identification and rhyming, and participated in a variety of other hands on games,” said Amanda Holland, a University of Rhode Island graduate from Pawtucket who served three terms for Jumpstart.


Holland served her first term as a corps member, her second term as a team leader, and her third term as a volunteer coordinator organizing events. She met Odhiambo when they shared a Jumpstart term. Holland then graduated in May 2011 with a degree in early childhood education. However, she dabbled in the fields of fashion design and psychology before Jumpstart inspired her to pursue a career working with children.


“I was very interested in working with young children, and I wanted to make the most out of my college experience. I hadn’t done a lot in high school and I regretted it, so I decided to join an organization in college. AmeriCorps had so many benefits, such as community service, an education award, getting to work on a team, and earning work-study money,” said Holland.


Both Odhiambo and Holland agreed that working on a team was one of the most challenging aspects of Jumpstart.


“Everyone was so different, which made getting all of the group members on the same page close to impossible,” said Odhiambo.


“Having so many people with different personalities working toward the same goal can be tough, but there were rewarding aspects as well. I enjoyed hearing the multiple perspectives and ideas of others. Through this experience, I also learned how to successfully organize and delegate tasks to each individual group member,” said Holland.


“I am certain that my three years involved in Jumpstart helped me to obtain a job quickly out of college. A large portion of my teaching portfolio is centered on my time with Jumpstart. I use many techniques for behavior management that I learned from Jumpstart in my classroom, as well as many of the games,” said Holland.


March kicked off the tenth recruitment season for Jumpstart at the University of Rhode Island. Next year, the program will increase the number of student volunteers from 67 to 80. Interested students can contact Catherine Cutlip at ccutlip@mail.uri.edu or visit the URI Jumpstart website http://www.uri.edu/volunteer/jumpstart.


Victoria Antonelli, an intern at the Communications and Marketing Department at URI, wrote this article.