KINGSTON, R.I. – September 4, 2012 – The University of Rhode Island celebrated the opening of its new $75 million building for the College of Pharmacy with a formal ribbon-cutting ceremony today, marking the completion of a voter-supported center for pharmaceutical teaching and research.

The celebration is calling attention to the college’s role in making the state, nation and world healthier, developing partnerships with pharmaceutical and biotechnology firms, attracting high paying jobs, and bringing in more than $83 million in federal and private research dollars, funding that has been reinvested in Rhode Island’s economy since 2000.

In addition the ribbon-cutting ceremony at 11 a.m. with University and public officials, donors, dignitaries, students and community members, a free public symposium on drug therapy in the 21st Century is planned for Sept. 14, and an international scientific conference on frontiers in pharmaceutical sciences featuring researchers from around the world and Nobel laureate Thomas Steitz will be held from Sept. 28 through Sept. 30.

The pharmacy college’s five-story, 144,000 square-foot building is the largest academic building on the Kingston campus. In 2006, voters overwhelmingly approved $65 million in general obligation bonds to finance the new pharmacy building; $10 million in private donations and University funds also supported the project. More than 380 Rhode Islanders were employed on the project, from architectural and engineering to construction jobs.

The new facility has allowed the University to accept more students into its six-year doctor of pharmacy program, its graduate programs and its new four-year bachelor’s program in pharmaceutical sciences. The building accommodates as many as 820 students, a 50 percent increase from 2006 when the bond was approved. The college’s most recent home, the 66,000-square-foot Fogarty Hall, was opened in 1964 and was designed for 235 students.

“When we talk about reinvigorating Rhode Island’s economy and its educational institutions, we can look proudly to the University of Rhode Island,” said Gov. Lincoln D. Chafee. “Rhode Islanders should be proud of their critical role in maintaining URI’s College of Pharmacy as an international leader in teaching, research and innovation. It is no exaggeration to say that the cutting edge pharmaceutical research conducted in this facility will benefit the health of Rhode Islanders and global citizens for decades to come.”

“The state can only reach its potential in creating quality jobs if we have a strong partnership between growing industries, like biotechnology, and our educational institutions,” said Congressman Jim Langevin. “Today’s opening of URI’s new College of Pharmacy is a major step forward in our efforts to ensure that our workforce and businesses in rapidly expanding health care fields are best positioned to boost the economy.” 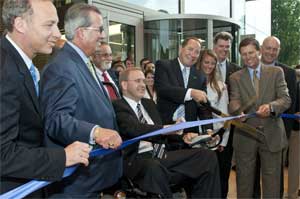 URI President David M. Dooley said the entire University community owes a deep debt of gratitude to the voters of Rhode Island for their support of the bond issue that made the building a reality.

“We not only offer our fellow citizens a big thank you, we also know that we must respond to the great challenge they have put before us: to continue to build our College of Pharmacy as a global biomedical and pharmaceutical center,” said Dooley.

“The college is a critical part of the knowledge-based economic future of the Ocean State, and with this facility we will be able to develop partnerships with leading biomedical companies, secure more research funding to reinvest into Rhode Island’s economy, attract start-up biotech companies to the state, and allow our young people to pursue exciting and gratifying careers right here in our beautiful state.”

Over the last five years, the job placement rate for graduates of the college exceeds 95 percent each year.

“We take great pride in attracting top undergraduate and graduate students from all over the world to our programs. Our faculty are renowned for their work in pharmacoepidemiology, drug interactions and drug delivery, cancer, Alzheimer’s disease, diabetes, toxicity and natural products,” said Ronald P. Jordan, dean of the College of Pharmacy. “Our faculty and students now have the very best environment and tools to continue to pursue many of health care’s greatest challenges. 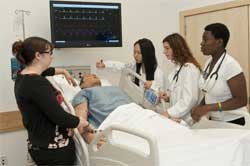 “We have graduated hundreds of talented pharmacists and researchers, and our faculty have established themselves as global authorities in many areas.

“Now, we literally stand on a new threshold that opens the door to exciting and cutting-edge experiences for our students, and the potential for discovery that could lead to unimagined business development opportunities for those in the biomedical fields. It’s no surprise to me that you can feel the energy pulsing through our community on this great day.”

A sunny, environmentally friendly building constructed in the Kingston campus’ new North Science District, the pharmacy building features bright, open classrooms and laboratories, healthy indoor work spaces, energy-efficient lighting systems, high-technology mechanical systems, and a site footprint with a minimal impact on the natural environment. The building is expected to earn a “Gold” rating in the U.S Green Building Council’s LEED® rating system. Through its technology and design, the building will use about 20 percent less energy than a traditional building of this size, with an expected savings of nearly $160,000 a year in utility costs. It was designed by Payette architects of Boston, and the contractor is Suffolk Construction Co. Inc., of Boston.

“The opening of the new pharmacy building is one more concrete step in the development of the North Science District, conceived about 10 years ago to strengthen the University’s leadership position in the health and life sciences,” said Vice President for Administration Robert A. Weygand. “It will physically and socially connect the faculty and students in pharmacy, nursing, chemistry, and biotechnology and life sciences to increase opportunities for collaboration, strengthen multi-disciplinary research and expand relationships with corporate partners and other institutions.” 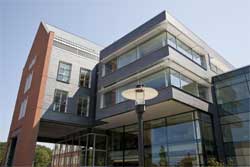 The new facility will also feature a $6 million current Good Manufacturing Process (cGMP) facility that will open later in the fall, as well as a beautiful medicinal garden that takes the college back to its roots in natural product research. The cGMP facility will permit the production of a wide range of human-use pharmaceuticals up to clinical trial scale. Dean Jordan said such activities will bring funding to Rhode Island and have the potential to stimulate development of biomedical businesses in the state.

The cGMP facility will enable the college to return to two historically important areas of work: the training of students and workers in manufacturing best practices and the training of drug manufacturing inspectors from the Food and Drug Administration (FDA) and from other countries around the world who look to the U.S. as worldwide leaders in drug development and manufacturing standards.

FIRST DAY IN NEW LAB: Students work in the Health Delivery Simulation Center as the University of Rhode Island opens its new $75 million building today. From left are Brooke O’Connell, of Kingston, who is pursuing a master’s degree in pharmacology and toxicology and three, six-year doctor of pharmacy students, Eva Fan of East Providence, Sydney Springer of Middletown and Florence Badejo of Providence.

A GRAND ENTRANCE: This is a view of the main entrance of the new $75 million College of Pharmacy at the University of Rhode Island.