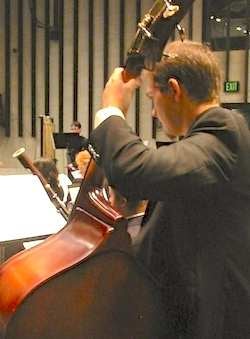 KINGSTON, R.I. — Nov. 16, 2012 — Whether you like jazz from cool or funky small combos or the swinging sounds of big bands, the Fall Jazz Series at the University of Rhode Island will have something to offer you as it presents three remaining concerts on Nov. 27, 30, and Dec. 6. The concerts will be held in the URI Fine Arts Center, 105 Upper College Road, Kingston. Please note the Nov. 27 event will be in the Music Department Rehearsal Hall, Room C100, and the others will be held in the Concert Hall. Admission is $10 general public, $5 students, with tickets available at the box office on a first-come basis starting 45 minutes before the concert.


The Straight Ahead Trio, directed by Kyle Barboza, will open Concert II of the series on Tuesday, Nov. 27 at 7:30 p.m. The World Jazz Combo, which leans toward the Afro-Cuban and is coached by Steve Langone, will also perform, followed by the URI Standards Combo coached by Dave Zinno, playing selections from the jazz repertoire and The American Songbook.


The C100 Big Band, directed by John Monllos, will be featured in Concert III on Friday, Nov. 30 at 8 p.m. The band will perform a wide variety of big band swing music in the tradition of Count Basie with hits such as Shiny Stockings. Their featured vocalist Bianca Sperduti will offer classic songs including Cheek to Cheek and Straighten Up and Fly Right. Don Chilton (lead trumpet) and his son William Chilton, a Rogers High School trumpeter, will team up for a trumpet duet entitled Bill. The band will also be presenting a modern composition by Gordon Goodwin’s Big Phat Band and Latin compositions by Antonio Carlos Jobim and Joe Henderson.


The bluesy sound of the B101 Big Band, directed by Jared Sims, will fill the concert hall on Thursday, Dec. 6 at 7:30 p.m. in the last concert of the series. Their program will include tunes such as Little Unhappy Boy (written for the URI big band by Alex Lee-Clark), But Not for Me, Satin Doll, Basically Blues, and Cruisin’ for a Bluesin’, performed by the sixteen-piece band with vocalist Rebecca Cunha.


The URI Concert Hall is handicap-accessible, and parking is available in the lot behind the Fine Arts Center, off Bills Road. For more information, please contact the URI Department of Music, 874-2431, or check the website: www.uri.edu/music.