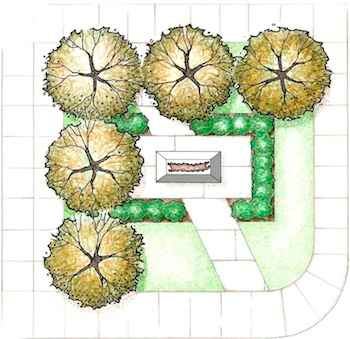 KINGSTON, R.I. – November 15, 2012 – Students in a landscape architecture class at the University of Rhode Island recently completed designs for a proposed memorial to the September 11 attacks for the Natick, Mass., fire and police departments. The assignment features the inclusion of a twisted steel beam salvaged from the World Trade Center by the Natick Veterans of Foreign War.


“I gave them a challenging assignment,” said URI Professor Richard Sheridan, “but the students said it was the best project they ever had because it was a real-life assignment with strong parameters, and they felt like they were being involved in something important to the community.”


Sheridan asked the students, all junior landscape architecture majors, to design a memorial with the iron beam as a centerpiece and to acknowledge police, firefighters and armed services personnel in their designs.


James Sheridan, chief of the Natick Fire Department and brother of the URI professor, came up with the idea of asking the students for preliminary designs, and he visited with the students to explain the project. The chief hoped the students’ designs would begin a discussion in his town about how best to memorialize the September 11 tragedy.


The Natick town selectmen approved installation of a memorial at a site adjacent to the police and fire department buildings.


“Most of the students are so young that they didn’t have as much emotional attachment to the disaster as the rest of us,” said Prof. Sheridan. “They approached the assignment with a curious attitude, and they came up with 15 totally different renditions of a memorial.”


On November 1, the URI students presented their design ideas to Chief Sheridan and other members of the Natick Fire Department, who said they were impressed with the quality and diversity of the work the students produced.


“All of the designs are excellent and unique, and they reflect the way the students felt about the events of September 11,” said Chief Sheridan. “It was pretty obvious that the students were inspired. They did sophisticated, amazing work.”


Student Dennis Staton of Warren said it was difficult incorporating the heartfelt emotions from the tragedy into his designs.


“I went for a formal and simple design,” he said. “I wanted people to immediately be able to see the beam as the centerpiece.”


Although he was just 12 years old on 9/11, Staton has clear memories of the aftermath of the attacks. “But the time I spent researching and thinking about this project gave me a new perspective on it,” he said. “I kept going back to my personal connection to the people I know who were directly affected. That kept playing in my head.”


Allison Desbonnet of Stonington, Conn., said that one of the biggest challenges of the project was the relatively small area they had to work with. “It was a huge event in our history, so I had a hard time memorializing it in a small space,” she said. “My design was done mostly in stone. The beam would be raised up on two stones that represent the fire department and police departments rising up from the tragedy that they faced.”


Among the 15 designs submitted by the students were variations on plazas and parks, including one that used the beam as the stylus of a sundial and another that incorporated the New York City skyline into a brick walkway.


Chief Sheridan said he will share the student designs with Natick officials and try to meld several of the students’ concepts into a final design for the memorial.


The illustration is from the design by student Dennis Staton.