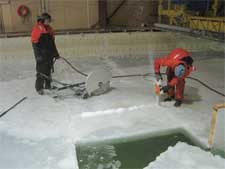 NARRAGANSETT, R.I. – November 13, 2012 – University of Rhode Island oceanographer Brice Loose is nearing completion of a two-month experiment inside a laboratory where the temperature is a frosty -20 degrees Fahrenheit to reproduce the surface of the frozen Arctic Ocean and learn what factors influence the exchange of gases between the water and atmosphere.


“The polar regions are very important areas for gas uptake by the ocean because the surface water there gets pulled down to the deep ocean,” said Loose, an assistant professor at the URI Graduate School of Oceanography. “But sea ice can act as a barrier to the exchange of gases between ocean and atmosphere, so we’re trying to figure out exactly how much exchange you get. The ice creates a huge wake behind it, and that turbulence leads to gas exchange.”


Inside the U.S. Army Corps of Engineers’ Cold Regions Research and Engineering Laboratory in Hanover, N.H., Loose and his colleagues use a 262,000-gallon tank filled with salt water to replicate Arctic conditions, creating channels and blowing strong winds to manipulate the movement of the ice. 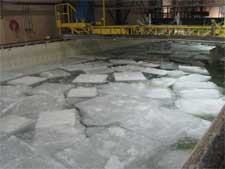 Loose said the project is one of a number of studies designed to understand the balance of carbon dioxide in the ocean and atmosphere.


“We want to come up with a predictive model that says, when you have this much sea ice cover and these kinds of winds and currents and temperatures, you can figure out the gas exchange,” explained Loose. “If we can prove such a relationship, then climate modelers can factor it into their models so we have a better understanding of ocean circulation and the distribution of carbon dioxide.”


According to Loose, wind speed is most commonly used to estimate the rate of gas exchange, because wind is the primary mechanism for forcing CO2 out of the atmosphere and into the ocean. But the presence of sea ice is believed to influence the exchange rate, and the changing quantities of sea ice due to climate change adds a bit of uncertainty to that calculus.


The researchers spent two years planning the experiment. Beginning in late September, Loose and his colleagues, including URI graduate student Ann Lovely, grew eight inches of ice on top of the 6-foot deep water in the tank, added CO2 and other gases to the water, and used a wind tunnel to create currents and to move the ice. Using a variety of sensors and other equipment, they measured the flow of water beneath the ice, the percentage of ice cover on the water surface, and the effect of convection driven by cooling at the surface to come up with a rate of gas exchange.


“We’re finding that all of these mechanisms play a role in gas exchange,” Loose said. “But it’s extremely difficult to predict what the ice is going to do – sometimes it flows like crazy, sometimes it jams up, and when the ice is in motion, freezing happens later – so all that will take more study.”


The next step will be to freeze the entire surface of the tank and make an opening in the ice and blow strong winds to compare the currents beneath the ice with the wind over the top and see how the gas exchange rates change.