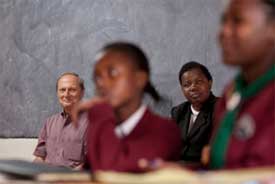 KINGSTON, Nov. 21, 2012 — When Bill Molloy took a trip with friends to Kenya seven years ago, he was invited to go for a “feeding.” He figured he’d be serving hay to elephants.


What he found instead were squalid classrooms in a Nairobi slum packed with hungry and HIV-positive children who could barely do their ABC’s or count past 10. He worked hard to hold back tears as he dished out the rice and beans.


On the flight home, he decided to start a non-profit to train Kenyan teachers to help those youngsters, herded into rooms to languish and, in at least one case, die. It was a lofty goal for the University of Rhode Island education lecturer, but not impossible.


So far, The Africa Teacher Foundation has sent seven American teachers — some from URI — to Kenya to teach reading, math, writing, and lesson planning. Molloy says he has trained 740 Kenyan and East African teachers and reached 29,000 students.


The teachers come away with a certificate in professional development, and Molloy comes away knowing that he has done something worthwhile. Others must think so as well; he has raised $200,000, mostly from friends and other teachers.


“This is clearly the most fulfilling work I’ve ever done,” says Molloy. “The impact is immediate, durable, and appreciated.” 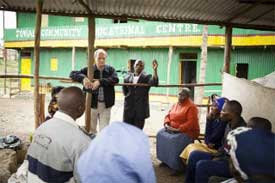 Molloy has come a long way from his days at Durfee High School in Fall River, Mass., where, for 35 years, he was an English teacher, building administrator, and assistant superintendent of schools in a system that, in his time, had 13,000 students speaking 60 languages.


Teaching in an urban school was challenging, as well as enormously rewarding. He taught students who were homeless and on drugs, but he also had students who dreamed of going to Harvard — and did.


In 2004, a year after retiring, Molloy joined URI’s School of Education in the College of Human Science and Services, teaching classes in educational psychology and fundamentals of education.


At the end of every semester, he talks to his students about Kenya and brings out his photos of tin-roofed classrooms at the Tender Heart Junior School and the wide-eyed children inside with nothing, not even a pencil.


“My students always want to know if they can go themselves,” says Molloy. His answer is no, not yet. The living and teaching conditions are so rigorous, he only accepts teachers with years of experience.


One of those teachers is Jackie Proulx, a 1972 graduate of URI who met Molloy at Durfee High School, where she taught physical education for 30 years and, later, went on to work as a principal at Attleboro High School in Massachusetts. Proulx, now retired, says her 2009 trip to Kenya introduced her to the world.


“The worst of the worst conditions in the United States would be considered good over there,” she says. “You want to cry. These people have such a passion to better themselves.”


They also appreciate what they’re learning — how to teach.


“When I was at URI we had all kinds of courses on how to present material and assess students to make sure they understand,” says Proulx. “Many of the teachers in Kenya haven’t had the opportunity to learn that.”


Self-pity is not in their lexicon, though it could be. Anywhere from 50 to 100 students are crammed into classrooms, which usually have one book and one chair, made of plastic. The rooms are so crowded students take turns sitting and standing — on dirt floors. An open sewer runs along the schools, creating an unbearable stench. Rodents feast at a nearby dump.


It was the classroom filled with orphans that inspired Molloy to return year after year. The children’s parents had died of AIDS, which had been passed on to the youngsters. The classroom was also where they lived and slept. Molloy could pick out the ones dying: no longer hungry, they handed off their food to a boy or girl in back.


Leslie Clark, a 1974 URI graduate who has been to Kenya twice since she retired four years ago as the math coordinator in Pawtucket, says the trip changed her life. She hopes to return in June. The group pays for the teachers’ flight and living expenses, but the teachers, who visit in the summer, work as volunteers.


“To see people who have nothing and value education like that is unbelievable,” says Clark. “They know that education is going to change their country. They’re like sponges. They are so grateful for everything.”


Those contributions could be a textbook or advice on how to go beyond Z. “They have such a passion to better themselves,” says Proulx. “I wish we could do more.”


Molloy’s story will soon be told on the big screen. Providence filmmakers John Lavall and Kate Kelley followed Molloy in Kenya this summer and will debut their film March 1 in Paff Auditorium on URI’s Providence campus.


For more information about the non-profit or to donate, visit africateacherfoundation.org or e-mail Molloy at wmolloy48@cox.net.

First photo: Bill Molloy, founder of The Africa Teacher Foundation, sits in a classroom in a slum in Nairobi, Kenya.


Second photo: Bill Molloy, founder of The Africa Teacher Foundation, talks to parents outside a school in a slum in Nairobi, Kenya.