Set firmly in, and often about, New York, Company’s plot revolves around Robert, a single man with no emotional commitments who reassesses his life on his 35th birthday by reviewing his relationships with his married acquaintances and his girlfriends. As Sondheim said in his book, Finishing The Hat (2010), “That is the entire plot.”


Based on a book by George Furth with music and lyrics by Sondheim, the Company was nominated for a record-setting 14 Tony Awards and won six. For the only time, the Tony Awards for Music and Lyrics were split into two categories. Sondheim won both awards. 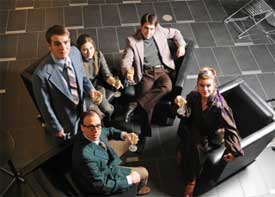 IN GOOD COMPANY: (l-r) Jimmy Calitri of South Kingstown as Larry, Andrew Burnap of South Kingstown as Robert, Julia Bartoletti of Worcester, Mass. as Sarah, Joshua Andrews of Coventry as Harry, and Rae Mancini of Providence as Joanne in Stephen Sondeim’s comedy, Company. Tickets and showtime details are at www.uri.edu/theatre.