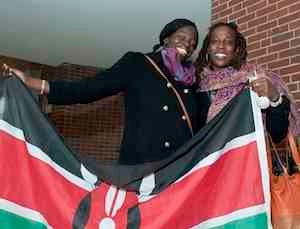 KINGSTON, Nov. 15 – When Emma Montague longs for the green fields of England, she looks up, not to the spread-out sky, but to a ceiling in the Memorial Union at URI.


There, hanging 20 feet above her in the atrium, is the British flag, a reminder that she is home, even though she’s really thousands of miles away on a leafy college campus in Kingston.


“It’s great,” said Montague, admiring her red and blue Union Jack. “I love it. The flag shows how committed the University is to international students.”


The British flag and 98 others from different countries were unveiled yesterday in a spirited ceremony to celebrate the University’s thriving international students.


The display, in the atrium by student organization offices, was impressive. Each flag represented a past or current URI student. That meant flags from Albania, Bangladesh, Cambodia, Honduras, Iceland, Korea, Latvia, Myanmar, Pakistan, Senegal, Tonga, Uganda, Venezuela, Zimbabwe and more.


“It’s a great idea,” said President David M. Dooley, as he stood behind a podium not far from the Latvian, Lebanese, and Liberian flags. “It’s a great moment for the University of Rhode Island, to acknowledge and celebrate the international diversity that’s part of our community.”


The flags are part of a push by Dooley to not only attract international students, but also embrace them after they arrive. One of Dooley’s goals is to make the campus more international to prepare students for a global economy.


“Six years ago, when I was a freshman, I never thought I would be here today, walking through the union and seeing my flag,” said Alice Odhiambo, who came to URI from Kenya in 2007. “I love it. URI is showing who I am and where I’m from.”


Odhiambo, who earned her undergraduate degree in 2011 and is working on her master’s in communication, is one of five members of her family to attend the University. Her mother and uncles are also URI alumni. Seeing her flag, she said, is enormously comforting.


“The University is not just a school for me,” she said. “It’s like a second home.”

The flags were the idea of Joe Berardi, the union’s building services coordinator, Sheri Davis, the union’s marketing and scheduling coordinator, Brenda Celonia, owner of Total Image, a hair salon on the union’s first floor, and others who want to spruce up the union to give it a less-institutional feel. The group is also considering renovating an empty room next to the salon and putting café tables and chairs on a grassy area outside the union.


“I’m thrilled with the changes,” said Celonia. “I’ve seen this building over the past 25 years change for the better. I have so many international students as clients now I don’t have to travel all over the world. They come to me.”


The display is colorful and whimsical. It also includes a clock with five time zones: United States; London; Hong Kong; Tokyo, and Sydney. Berardi hopes to install a sign that says “International Atrium” in different languages.


Montague, who is getting her master’s in College Student Personnel, was lured from her hometown of Suffolk, England, to the URI campus by Bruce Hamilton, the union’s director, during a conference they both attended in Britain. She had an interest in student affairs, and he persuaded her that URI would be a good fit.


“International students brings a rich culture to the University,” Montague said. “This display is a huge step. Having something very visual like this communicates a good message.”


Now that message of inclusion is out in the open, for all to see.


“Usually, all the international students are kind of hidden,” said Lennart Kleinfeldt, a native of Germany who is getting his master’s in chemical engineering. “When you walk around campus, you don’t see this variety. Here, it’s nicely shown.”


International students who don’t find their flags, can call Berardi to put in requests. He will happily oblige. There’s plenty of room for more.