KINGSTON, R.I. – Dec. 11, 2012 – Students and faculty members weary from the end-of-semester crush, shoppers who may need a respite and anyone feeling too much stress should stop by the Robert L. Carothers Library and Learning Commons for a trip into old-world Germany.


In the lobby of the main University of Rhode Island library, are 20 commanding nutcrackers, 28 dainty angel figurines playing in a Christmas orchestra and 19 jolly-looking smokers ready to disburse sweet aromas of pine and incense. There is no charge to browse the five cases containing fine wooden carvings, painted in bright colors. Visitors only have to take time out from the rat race.


This peek into the old mining world of Germany’s Ore Mountains is part of the collection of retired URI Professors Gerald and Sylvia Krausse, who last exhibited their pieces in the 1980s.


“These haven’t seen the light in many years,” Sylvia said with a grin.

“The oldest piece is a 100-year-old nutcracker that my dad gave to me when I was three,” Gerald said. “Everything in here is from Saxony in the Ore Mountains where miners used to carve these items to make a living when the mines closed. My grandfather was a miner.”


In an essay about the 100-year-old piece, Gerald said the figure has celebrated Christmas in the former East and West Germany, England and the United States since the 1930s. The silver miner is in a uniform worn during holidays and parades. When woodcarving began in the mineral region, people portrayed themselves as miners.


Gerald said nutcrackers were first produced in the Ore Mountains and gained popularity in 15th and 16th centuries. Residents enjoyed a variety of nuts as treats during the holidays and being able to use and display the nutcracker at Christmas time became a favorite tradition. The Christmas nutcracker represented power and strength, necessary to keep away evil spirits. The fierce demeanor and bare teeth were designed to protect people’s homes at the time. 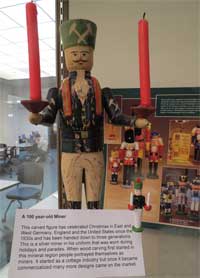 Nutcrackers became popular in the United States only about 60 years ago when American soldiers, returning from World War II, brought them home and started a tradition that continues today, Gerald said. The 1892 Nutcracker Suite Ballet by Tchaikovsky, performed regularly in this country since the 1950s, has further popularized the nutcracker as a staple for holiday decorations and collectors.


Sylvia, who is from Indonesia, met Gerald when they were students in Hawaii, and she is just as enthralled by the German artwork as her husband. “She was interested in German and I was interested in Asian studies and the two of us just meshed,” Gerald said.


Sylvia, a retired library professor and Gerald, a retired marine affairs professor, have been collecting since the 1970s.


“The nutcrackers are his collection and the smokers (wooden figures designed to disburse the aromas of burning pine, etc.) are my collection. The angels who make up the orchestra are also mine.”


“Practically, every traditional occupation is depicted in the woodcarvings of the smokers,” Gerald said.


“Three major examples are the baker, the carpenter and the fisherman, also known as the ‘Nor’ easter’,” Sylvia said.


The smokers are used with incense to celebrate the gifts of the Three Wise Men, and they mark the end of the Christmas season. The earliest smokers were made from dough or paper mache not wood. In the early 19th century, however, wood became the most popular material because it was more durable and locally available, according to Gerald. At first smokers were made in the image of working folk rather than after political, military or religious figures.


The angel figurines date back to the 1930s and are the gemstones of handcrafted folk art from Germany, Gerald said. Many folk art lovers have long sought these figures for their collections. They are from the workshop of Wendt & Kuehn, which was founded in 1915 by Margarethe Wendt and Margarethe Kuehn, two young women who added their personal artistic style to the design of folk art figures.


NUTCRIACKERS FROM GERMANY: Sylvia and Gerald Krausse, retired URI professors, display nutcrackers on exhibit in the Robert L. Carothers Library and Learning Commons. The nutcrackers provide a peek into the culture of the old mining world of Germany’s Ore Mountains. The couple last exhibited their pieces in the 1980s.


ANGELS IN THE ORCHESTRA: These 28 angel figurines date back to the 1930s and are the gemstones of handcrafted folk art from Germany. Many folk art lovers have long sought these figures for their collections.


LOOKIN’ GOOD AT 100: This nutcracker is a 100-year-old piece given to retired URI Professor Gerald Krausse by his dad gave when he was three. Miners from Saxony in the Ore Mountains used to carve these items to make a living when the mines closed. Gerald’s grandfather was a miner.