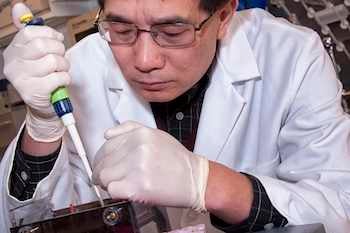 KINGSTON, R.I.— December 10, 2012 – A University of Rhode Island researcher has discovered that the weight-loss drug orlistat, known by the brand names Xenical and Alli, inhibits a key enzyme that may lead to “severe toxicity of internal organs such as the liver and kidney.” The inhibition is irreversible and can be caused by a low level of the drug.


Professor Bingfang Yan’s study funded by the National Institutes of Health, also found that the drug alters efficacy of medicines, and particularly limits the effectiveness of some anti-cancer drugs.


Part of the research results will be published in the journal, Biochemical Pharmacology, which has the article posted on its website today. Yan also alerted the U.S. Food and Drug Administration to his findings.


Orlistat, which was originally approved by the FDA in 1999 as the prescription drug Exenical, was approved in 2007 as the over-the-counter medication Alli. It has been the most commonly used medicine to treat obesity for more than a decade, Yan said.


“Since it has been available over–the-counter, there has been a drastic increase of toxicity among patients using the drug,” Yan said. “It has been linked to severe liver failure, acute pancreatic failure and acute renal (kidney) failure.”


Yan said orlistat works in the intestinal tract by preventing fat from being absorbed by the body. It is generally accepted that orlistat remains in the intestine and that the body does not absorb it.


“But orlistat is reportedly absorbed, and certainly internal organs such as the liver and kidney are exposed to this drug upon absorption,” he said.


The study showed that the drug is a potent inhibitor of carboxylesterase-2, which is a major detoxification enzyme in the liver, kidney and gastrointestinal track. “When the activity of this enzyme drop in those organs, toxicity increases or the efficacy of some drugs are altered,” Yan said.


The enzyme is known to metabolize a wide range of medicines including aspirin and the cancer drugs irinotecan and pentyl carbamate of p-aminobenzyl carbamate of doxazolidine.


Prior or co-presence of orlistat with one of the anti-cancer drugs resulted in cancer cells being far more prolific.


“Alli-based interactions can be key factors in the efficacy of medicines,” Yan said.


Yan was also interested in Alli’s effects on aspirin and its use as a blood thinner. “Aspirin is used to treat blood clots. Yan predicated: “Orlistat would increase the therapeutic potential of aspirin, which may increase the tendency of bleeding.”


This isn’t the first time that Yan has found critical drug interactions in his studies.


In 2006, he discovered that the anti-viral drug Tamiflu would be rendered ineffective in patients also taking the anti-clotting drug Plavix. His published findings have resulted in new dosing regimens for patients who need both drugs.


Yan is one of the authors of the 6-volume Encyclopedia of Drug Metabolism and Interactions.  This state-of-the-art integrated reference represents a global effort and presents more than 120 chapters by prominent authors from 11 different countries: the United States, Canada, United Kingdom, Germany, Australia, Singapore, India, Japan, France, Denmark, and Switzerland.