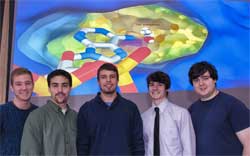 KINGSTON, R.I. – Dec. 10, 2012 – It can be difficult to understand how drugs like Iressa and Prozac work in the body just from reading a textbook. That’s why students at the University of Rhode Island have been creating 3D models and animations to explain complex scientific processes using simple visuals.


The collection of YouTube videos, titled “URIanimation,” has received more than 1 million views. The students have created 22 videos in the past five years.


“It’s a significant achievement for our animation students and is a global outreach effort that far exceeds any other URI-based YouTube videos,” said Bongsup Cho, professor of medicinal chemistry and associate dean for research and graduate programs in the College of Pharmacy. Cho manages the YouTube page and 3D animation project.


Professors in Israel and China have commented on some of the videos, expressing interest in redoing the voiceovers in other languages for their students. Cho has granted these professors permission to use the videos for free as educational tools.

The 3D animation and printing technology program is funded through grants from the Champlin Foundations and Provost’s Innovative Approaches Using Technology.


“My job is to provide the students with high-end tools,” Cho said. He credits the success of the YouTube page completely to the quality of the students’ videos.

The main lecture hall in the new pharmacy building has 3D capabilities with its projector system. Some of the students’ videos are used as educational tools in various science classes held in this building.


Sean Gilman, a junior doctor of pharmacy student from Hope Valley, R.I., produced a 3D animation video showing how the body becomes resistant to Iressa, a type of lung cancer treatment. The “Mechanism of Iressa Drug Resistance” animation is used in some higher-level oncology classes.


“Creating animations makes you an expert in that area,” Gilman said. “This project has allowed me to study the pharmaceutical process and help other students learn.”


“The animation project is an ongoing collaboration among students from many different majors,” said Cho. Students in the colleges of Pharmacy, Engineering, and Arts and Sciences have created animations.


Nick O’Brien, who graduated in 2009 with a degree in philosophy and a minor in women’s studies, was working as a student technical assistant on campus when he heard about the 3D animation project. His first project examined Cisplatin, a cancer drug. It took him eight months to produce the entire animation.


“If it took a year to do, that was OK – I just wanted it to be good,” said O’Brien of the project. “In college, there is a lot of pressure to get projects done in just a couple of weeks, but Dr. Cho was more focused on making quality animations and didn’t care how long it took.”


As a student technical assistant, O’Brien had 24-hour access to the College of Pharmacy’s computer lab, which allowed him to work late at night without any distractions.


“Working in the lab was one of the coolest, most focused work experiences I’ve ever had, and one that I will never forget,” O’Brien said.


O’Brien produced a second video on the molecular mechanism of Prozac, which he completed as his senior project for the honors program.


Steve Norris, a senior computer engineering student, has also been involved in the animation project as part of his student technical assistant job.


The North Attleboro, Mass. resident had limited science knowledge and had never worked on 3D animations before, but his strong computer background helped him catch on quickly.


Unlike some other animations, Norris’ animation is interactive and set up in more of a self-test format. Students can watch animations of protein synthesis and answer review questions to quiz themselves on biological concepts. Norris’ mother, Joanna Hanks Norris, a professor in the biology department, uses this animation in her cell biology classes.


For Jeff Ferrucci, the animation project gives him an opportunity to combine aspects of his two majors: physics and film/media. Like most of the other students in the program, Ferrucci had no prior experience creating animations.


“I didn’t know anything about animation, but I liked it immediately,” said Ferrucci, a Cumberland, R.I. resident. “It has become one of my favorite hobbies.”


Over the last year or so, Ferrucci has made about four or five animations on his own and helped other students with theirs. His animations have been used in environmental and nature resource economics and honors physics courses.


To view the videos on the URIanimation page, visit www.youtube.com/user/URIanimation. The more recent videos are uploaded to YouTube in 3D and can be viewed as such on home computers using red and blue 3D glasses.


This press release was written by Danielle Sanda, an intern in URI’s Department of Marketing and Communications and a public relations major.

ANIMATION MEETS SCIENCE: Five students involved in URI’s 3D animation program stand in front of a projection of one of the student-produced videos, which shows how the body becomes resistant to Iressa, a type of lung cancer treatment. Pictured, from left to right, are: Sean Gilman, Ian Weininger of Middletown, R.I., Joseph Schrader of Wakefield, R.I., Jeff Ferrucci and Steve Norris.


3D PRINTING: In addition to 3D animations, students can also create tangible models of molecules using a 3D printer. Some of the molecule printouts are pictured here.