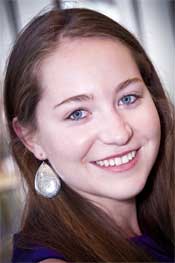 KINGSTON, R.I.- May 6, 2013 – It is safe to say that after graduation, Andrea Russell, a pharmacy major from Bedford, N.H., won’t look back on her college years and wish she had been more involved.


Her experiences and accomplishments, which include studying abroad in three different locations, serving in the United States Air Force, and attending the University of Rhode Island on a full academic scholarship, surpass what most people achieve in a lifetime.


Russell lives by the motto, “Try everything once.”


“My freshman year, I joined every club imaginable,” she added. “That’s how I discovered what I was passionate about and what I didn’t care for.”


Her greatest accolade on her three-page resume is graduating from the URI Honors Program, last spring, with a 3.6 grade point average.


“I don’t usually get excited about things, but as soon as I finished the honors program, I wanted to fist pump,” exclaimed Russell.


Her honors project on transitional justice in Nepal took a close second.


“Many of Nepal’s government officials committed human rights violations while the country was in a civil war,” explained Russell. “Now, the people are struggling to decide on a new leadership structure to unite the two sides.”


Russell’s thesis offered the solution. “Nepal can’t move forward in creating a new constitution until justice is granted to the victims of human rights violations.”


Her service trip to Nepal in 2012 was not the first time Russell traveled abroad to make a difference.


In 2008, while serving as a project management intern, Russell completed her Certificate in Community Development at Stellenbosch University in Stellenbosch, South Africa. She spent the semester aiding children in underserved areas.


“There was so much prejudice, and the divide between the haves and have-nots was extremely evident,” said Russell.


The following year, she studied in a place within the United States and had a polar opposite experience to the one she had in South Africa.


“I decided I wanted to spend my spring semester at California State University,” said Russell. “Most of the people I encountered were friendly and open to new ideas, which reflected the diversity of the school.”


When Russell came back, she started working for the URI International Program as the National Student Exchange Student Coordinator.


“I wanted to encourage other students to study outside of Rhode Island, because I had such a great experience doing so,” said Russell.


Her other honors and experiences include being named a University College Scholar, which is awarded to the top 10 freshman at URI, receiving an undergraduate research grant for peace research, completing a minor in anthropology, being awarded a Benjamin A. Gilman Scholarship for International Study, and advocating for domestic hunger awareness with URI’s Feinstein Center for a Hunger Free America.


“I really wanted to get the most out of my college experience, and leave feeling like I had squeezed everything out of URI that I could,” said Russell. “My desire for new experiences is what drove me to discover my niche.”


After her May 2013 graduation, Russell will enter the United States Air Force as an active duty pharmacist. She has been in the reserves for the past couple years.


“My freshman year, we had a speaker who was a pharmacist for the Navy,” said Russell. “She got to travel all over the world, while helping people and receiving job benefits; it seemed like a really great lifestyle.”


Russell found that the U.S. Air Force was the best fit for her, based on the “helpful and open-minded” attitudes of the pharmacists she encountered in this branch of the military.


“It’s a diverse job that will never get boring,” said Russell.


Being bored is something that an active, involved, and inspirational person like Russell would never want to be.


Victoria Antonelli, a senior journalism major and intern at the URI Marketing and Communications Department, wrote this press release.