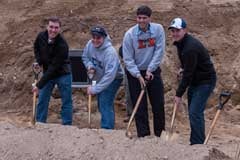 KINGSTON, R.I. – November 26, 2013 – “This house is the realization of a dream,” said Dale Harrington, president of the Sigma Chi Alumni Corporation, at its groundbreaking ceremony for a new fraternity house at the University of Rhode Island.


Members and friends of the Delta Sigma Chapter of the Sigma Chi Fraternity at URI gathered earlier this month on Fraternity Circle to formally begin construction of a new house on the Kingston campus. The brisk autumn air and chilled fingers had little effect on Sigma Chi’s members or supporters as they trudged through mud and dirt to stand proudly on the grounds of their future $3.3 million home.


“Sigma Chi alumni haven’t felt so euphoric since the original Chapter house was torn down in 1998. Rising from the ground at 13 Fraternity Circle, the new chapter house has a remarkably similar internal layout to the old. Now, our fond memories that began in 1949 of living on Upper College Road are being rekindled. It was a long road back but the Delta Sigma Chapter of Sigma Chi Fraternity, supported by many alumni and undergraduate chapter members, made it happen,” said Harrington.


A new home has been the focus of Sigma Chi alumni for the past 16 years. URI’s Alumni Center now sits on the original site. In December of 2011, after forming a colony and meeting several URI conditions, 37 brothers of the fraternity were listed on the charter of the Delta Sigma Chapter. Sigma Chi had officially returned to campus. 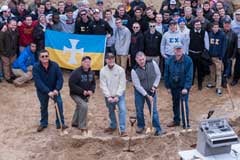 “Our vision as a chapter had shifted from getting chartered to growing and strengthening our chapter, brotherhood, and alumni relations,” said Nathan Umbriano ’14, brother, recruitment chairman and past president of Sigma Chi, who was one of the 37 brothers who re-chartered the fraternity. “This new vision was to put the chapter in a position where the house could be built.”


According to Umbriano, in just four semesters, the Delta Sigma Chapter grew from 15 to 60 active members and won Sigma Chi’s Peterson Significant Chapter Award, the highest national honor the fraternity bestows upon an undergraduate chapter. The URI Interfraternity Council also honored the chapter for its recruitment service and leadership activities. “It was a constant grind, but every single day we worked to make our chapter better, something that we still do regardless of the house being built.”


“All of the hard work our fraternity has done over the past 2 years, though arduous and tedious, has finally come to fruition. Honestly, it’s a bit surreal,” said Steve DelSonno ’15, brother, Interfraternity Council representative and former pledge educator of Sigma Chi. 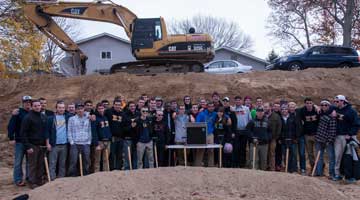 The brothers of Sigma Chi aren’t the only ones excited about the new addition to our community. “Sigma Chi at the University of Rhode Island dates back to 1949 with a rich tradition on our campus. The current undergraduates have excelled in leadership, scholarship and service, and the fraternity alumni have raised thousands of dollars to reestablish their chapter house on our campus. We are excited to have them return,” said URI’s Student Affairs Vice President Thomas R. Dougan.


The Greek community at URI has similar sentiments. “The proposed architectural design will add a new elegance to Fraternity Circle and has prompted the larger Greek life community to develop a sense of neighborhood design for the entire area. It’s an exciting time for Fraternity Circle!” said Stephen Simo, director of Greek affairs at URI.


During the ceremony, President J.C. Rawls ’15 expressed his appreciation to his brothers for their hard work. “I couldn’t be more proud of a better group of people. While it takes hands to build a house, it takes hearts to make it a home.”


Sigma Chi brothers extend their thanks to the University and its alumni, the Sigma Chi International Fraternity, the Rhode Island Board of Education, Citizens Bank, and the various contractors.


This release was written by Sabrina Galiney, a URI Marketing and Communications intern and public relations major.


Active brothers, pledges, and sweetheart of Sigma Chi Fraternity at URI pose during groundbreaking ceremonies for a new house recently on Fraternity Circle