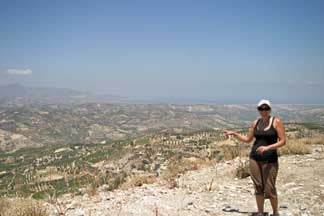 
“It was a great experience,” she says. “You read about all this stuff in books and learn about it in class, but you never really see what’s out there until you go to a site. It was exciting.”


Verrier graduated from URI last May with degrees in anthropology and classical studies. She spent three months last summer on Crete, thanks to a $1,000 grant from the Undergraduate Research Initiative.


Her project looked at the archaeological site of Mochlos on the Greek island to find out when a volcano on the nearby island of Santorini erupted. Most scholars agree that the volcano erupted between 3500 and 3600 years ago during the height of the Minoan civilization, at a time known as the Bronze Age.


The eruption was so catastrophic that the center of Santorini collapsed. Ash covered the area, seawater rose to dangerous levels, and hot gases exploded.


For years, archaeologists argued that the Santorini eruption led to the collapse of the Minoan civilization. But now scientists believe the Minoans not only survived the disaster, they continued to prosper for generations.


Verrier examined dozens of boxes of pottery pieces recovered during digs over the last several decades. She dated the pieces by looking at their shape and paintings. She says it was thrilling to hold fragments of an ancient teacup.


“It was amazing thinking that the last time anyone used this cup was 4000 years ago,” she says. “This is why I love archaeology.”


As a little girl growing up in Coventry, Verrier got hooked on archaeology after watching the movie “Raiders of the Lost Ark.” Still, she studied physics and engineering her first three years at URI.


Eventually she discovered she was in the wrong field. She credits Mary Hollinshead, an associate professor of classical archaeology and ancient Greece and Rome, of reigniting her passion for archaeology, especially the Bronze Age Mediterranean.


“She’s still helping and guiding me today,” says Verrier. “I’m so grateful to her.”


The Crete trip was Verrier’s second visit to Greece. In her junior year, she helped excavate a Mycenaean Palace at the Iklaina-Pylos site in southwest Greece. She has also worked on local digs, including a pre-colonial site in Connecticut and a battlefield site in North Smithfield.


One of her group’s biggest finds from the Smithfield spot was a musket ball from King Phillips War. She also unearthed part of an ox shoe from colonial times. “There’s so much stuff all over Rhode Island,” she says. “There’s much more than people think. You just have to start digging.”


“Archaeology is intellectually challenging because you’re dealing with so many questions,” she says. “You’re never going to be able to find an answer to all those questions. We have a lot of pieces, but you’ll never get the complete picture because it happened thousands of years ago. That’s what makes archaeology so mysterious.”


Photo above: Danielle Verrier, 24, of Coventry, who spent last summer on Crete examining pottery pieces 4000 years old. Verrier graduated from URI in May, 2013 with degrees in anthropology and classical studies.